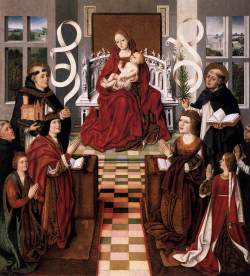 "Let the children of Israel make the Phase in due time . . . according to all the ceremonies thereof" (Num. ix 2, 3).

"And he made, of violet and purple, scarlet and fine linen, the vestments for Aaron to wear when he ministered in the holy places, as the Lord commanded Moses" (Ex.xxxix. 1)

"In every place there is sacrifice and there is offered to My name a clean offering" (Malach. i. 11).

"And another Angel came and stood before the altar, having a golden censer: and there was given to him much incense, that he should offer of the prayers of all saints upon the golden altar, which is before the throne of God" (Apoc. viii. 3).


The Ceremonies of the Catholic Church

'Twas Sunday morning. Suddenly the silence was broken by a number of voices singing in unison. He stopped to listen. To his great astonishment he distinguished the music of a Mass, and of Catholic hymns well known to him.

What could be more touching than this simple, savage people endeavoring to celebrate the Lord's Day as they had been taught by the priest fifty years before? What more elevating than those sacred songs—the Stabat Mater, the O Salutaris, or the Te Deum—uttered by pious lips and resounding through the forest primeval? What better evidence could we have of the beneficial effects of our ceremonies in raising the heart to God?

The Marriage Tie - One and Indissoluble