What Are the Seven Deadly Sins? 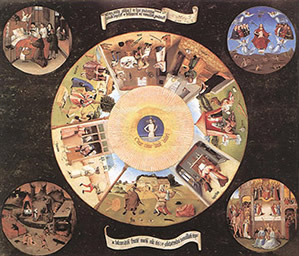 The Seven Deadly Sins, also known as the Seven Cardinal Sins, are:

The list of seven deadly sins was never a formal one, and has undergone changes throughout the course of time. Evagrius Ponticus, a monk living in the 4th Century CE, identified eight sins, which included something called acedia in Greek, variously translated as despondency, despair, or spiritual laziness. Pride and vainglory were sometimes separated into two different sins.

Since there is nothing unique about these bad behaviors to one group of people or to one era in human history, it is reasonable to state that virtually all cultures and religious paths have recognized the importance of avoiding such habits. In Chapter 16 of the Bhagavad-Gita (written at some point between 400 BCE and 200 CE), we read that, “There are three gates leading to this hell - lust, anger, and greed.”

Our problem need not be one of assigning credit for recognizing the seven deadly sins, but should rather be one of asking ourselves whether this list of “sins” is still valid and, if so, what each of us personally should do about that fact.

First, let us apply ourselves to the question of modern relevance. Going down the list, we see that modern society has created a counter-argument in favor of each of the seven behaviors, either explicitly or implicitly. “Greed,” we are told in the movie Wall Street, “is good,” and there might be some real-life businesspersons who happily agree with this sentiment.

Gluttony, which some have defined as the excessive desire for food to the point that it causes it to be withheld from the needy, seems not to be a concern for self-described “foodies.” Anger can be called righteous, and we are often told that one should have pride. Modern marketing techniques are frequently designed to excite envy, or lust, or any of the other deadly sins, and such techniques would not be successful if all of us were in agreement that these behaviors were things to be avoided.

The second question, then: what should each of us do as individuals in a world where we are constantly bombarded with the idea that it is permissible to be lustful, gluttonous, greedy, slothful, angry, envious, and proud? Simply put, we should resist.

For every bad behavior, there is a corresponding good behavior that can be developed in its place. The British Abbot Christopher Jamison has written an excellent book on this topic, entitled, Finding Happiness: Monastic Steps for a Fulfilling Life. His ideas are sound, and one need not enter a monastery or convent in order to implement his suggestions.

My own thought is that we can train our minds to think critically and provide positive counter-suggestions for every negative suggestion.

To be clear, the counter-idea to lust is not celibacy, but chastity. There is nothing wrong at all with the physical expression of love between two people in love, but such love does not require lustful perversion or pornography.

When tempted by gluttony, we can immediately call to mind those in poverty who will go to bed tonight with no supper. Why be a “foodie” and have a moment’s passing pleasure when we could actually get up from the table and go help someone desperate for something to eat? Would that not be far more pleasurable?

Greed, also, is conquered by charitable thoughts and actions. “More things,” will not bring happiness. Sharing our good fortune with others will.

Sloth, we must remember, is something that injures us both physically and mentally, and is an affront to God, who gave us this life. You have life – get up off your couch and use it for something worthwhile! Nothing to do? Go help in a soup kitchen, or at an animal shelter. Go clean weeds from the river bank. There is always something to do.

Anger, or wrath, does us no good and does others harm. When we are tempted to become angry, let us count to ten, or to one hundred, or to ten thousand if that is necessary, because losing control of our emotions will certainly end up causing a great deal of pain.

When confronted with the suggestion that we should give in to envy, let us try to call to mind immediately how small we would become by giving in to that suggestion, and cultivate instead the instinct of being happy for the success of others.

And finally, let us put away our pride. When tempted to feel puffed up with our own self-importance, we should call to mind the words of Vivekananda, who told us, “Truth will never come into our minds so long as there will remain the faintest shadow of Ahamkâra (egotism).”

The counter-measures to the Seven Deadly Sins are, thus, more than methods of avoiding sin. They are Seven Roads to Happiness, and they are roads accessible to all.