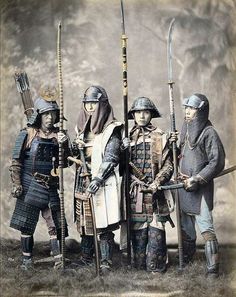 To the Samurai, courage was scarcely deemed worthy to be counted among virtues, unless it was exercised in the cause of Righteousness. In his "Analects" Confucius defines Courage by explaining, as is often his wont, what its negative is. "Perceiving what is right," he says, "and doing it not, argues lack of courage." Put this epigram into a positive statement, and it runs, "Courage is doing what is right." To run all kinds of hazards, to jeopardize one's self, to rush into the jaws of death—these are too often identified with Valor, and in the profession of arms such rashness of conduct—what Shakespeare calls, "valor misbegotten"—is unjustly applauded; but not so in the Precepts of Knighthood. Death for a cause unworthy of dying for, was called a "dog's death." "To rush into the thick of battle and to be slain in it," says a Prince of Mito, "is easy enough, and the merest churl is equal to the task; but," he continues, "it is true courage to live when it is right to live, and to die only when it is right to die," and yet the Prince had not even heard of the name of Plato, who defines courage as "the knowledge of things that a man should fear and that he should not fear." A distinction which is made in the West between moral and physical courage has long been recognized among us. What samurai youth has not heard of "Great Valor" and the "Valor of a Villain?"

Valor, Fortitude, Bravery, Fearlessness, Courage, being the qualities of soul which appeal most easily to juvenile minds, and which can be trained by exercise and example, were, so to speak, the most popular virtues, early emulated among the youth. Stories of military exploits were repeated almost before boys left their mother's breast. Does a little booby cry for any ache? The mother scolds him in this fashion: "What a coward to cry for a trifling pain! What will you do when your arm is cut off in battle? What when you are called upon to commit hara-kiri?" We all know the pathetic fortitude of a famished little boy-prince of Sendai, who in the drama is made to say to his little page, "See thou those tiny sparrows in the nest, how their yellow bills are opened wide, and now see! there comes their mother with worms to feed them. How eagerly and happily the little ones eat! but for a samurai, when his stomach is empty, it is a disgrace to feel hunger." Anecdotes of fortitude and bravery abound in nursery tales, though stories of this kind are not by any means the only method of early imbuing the spirit with daring and fearlessness. Parents, with sternness sometimes verging on cruelty, set their children to tasks that called forth all the pluck that was in them. "Bears hurl their cubs down the gorge," they said. Samurai's sons were let down the steep valleys of hardship, and spurred to Sisyphus-like tasks. Occasional deprivation of food or exposure to cold, was considered a highly efficacious test for inuring them to endurance. Children of tender age were sent among utter strangers with some message to deliver, were made to rise before the sun, and before breakfast attend to their reading exercises, walking to their teacher with bare feet in the cold of winter; they frequently—once or twice a month, as on the festival of a god of learning,—came together in small groups and passed the night without sleep, in reading aloud by turns. Pilgrimages to all sorts of uncanny places—to execution grounds, to graveyards, to houses reputed to be haunted, were favorite pastimes of the young. In the days when decapitation was public, not only were small boys sent to witness the ghastly scene, but they were made to visit alone the place in the darkness of night and there to leave a mark of their visit on the trunk-less head.

Does this ultra-Spartan system of "drilling the nerves" strike the modern pedagogue with horror and doubt—doubt whether the tendency would not be brutalizing, nipping in the bud the tender emotions of the heart? Let us see what other concepts Bushido had of Valor.

"Ah! how in moments like these
Our heart doth grudge the light of life;"

"Had not in hours of peace,
It learned to lightly look on life."

Of such character was the battle fought on the bank of the Koromo River, late in the eleventh century. The eastern army routed, its leader, Sadato, took to flight. When the pursuing general pressed him hard and called aloud—"It is a disgrace for a warrior to show his back to the enemy," Sadato reined his horse; upon this the conquering chief shouted an impromptu verse—

"Torn into shreds is the warp of the cloth" (koromo).

"Since age has worn its threads by use."

The sorrow which overtook Antony and Octavius at the death of Brutus, has been the general experience of brave men. Kenshin, who fought for fourteen years with Shingen, when he heard of the latter's death, wept aloud at the loss of "the best of enemies." It was this same Kenshin who had set a noble example for all time, in his treatment of Shingen, whose provinces lay in a mountainous region quite away from the sea, and who had consequently depended upon the Hōjō provinces of the Tokaido for salt. The Hōjō prince wishing to weaken him, although not openly at war with him, had cut off from Shingen all traffic in this important article. Kenshin, hearing of his enemy's dilemma and able to obtain his salt from the coast of his own dominions, wrote Shingen that in his opinion the Hōjō lord had committed a very mean act, and that although he (Kenshin) was at war with him (Shingen) he had ordered his subjects to furnish him with plenty of salt—adding, "I do not fight with salt, but with the sword," affording more than a parallel to the words of Camillus, "We Romans do not fight with gold, but with iron." Nietzsche spoke for the samurai heart when he wrote, "You are to be proud of your enemy; then, the success of your enemy is your success also." Indeed valor and honor alike required that we should own as enemies in war only such as prove worthy of being friends in peace.