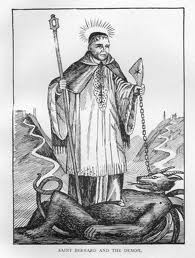 Is Demonic Possession a "Real" Phenomenon?

Or to put the question a different way: Is demonic possession an objective reality, or a psychological problem?  Do demons really exist, or are they all in the mind?  Historically, demonic possession has been accepted and treated as reality-based.  To quote Tertullian, "Let a person be brought before your tribunals who is plainly under demoniacal possession. The wicked spirit, bidden speak by the followers of Christ will as readily make the truthful confession that he is a demon as elsewhere he has falsely asserted that he is a god.....What clearer proof than a work like that? What more trustworthy than such a proof? The simplicity of truth is thus set forth: its own worth sustains it; no ground remains for the least suspicion. Do you say that it is done by magic or by some trick of the sort? You will not say anything of the sort if you have been allowed the use of your ears and eyes. For what argument can you bring against a thing that is exhibited to the eye in its naked reality?"

In extreme cases, an exorcism may be warranted.  According to the Catholic Encyclopedia,  "Exorcism is (1) the act of driving out, or warding off, demons, or evil spirits, from persons, places, or things, which are believed to be possessed or infested by them, or are liable to become victims or instruments of their malice; (2) the means employed for this purpose, especially the solemn and authoritative adjuration of the demon, in the name of God, or any of the higher power in which he is subject."