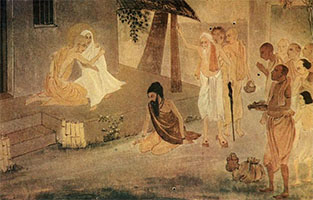 The following list of Hindu terminology is taken from Chaitanya's Life And Teachings, written by Krishna das Kaviraja and translated into English by Jadunath Sarkar. The second edition of the work was published in 1922 by M. C. Sarkar & Sons. This list is not intended to be comprehensive, but should be helpful to English readers seeking definitions of frequently-encountered terms used in discussions of Hinduism.

Abadhut—an ascetic who has renounced the world.

Adwaita Acharya—an elderly scholar of Shantipur and associate in Chaitanya's devotions before he became a sannyasi.

Arati—divine service performed to a god in the early morning or after dusk, with lamps, incense, and instrumental music, especially bells.

Balarám—the elder brother of Krishna; the images of the two with that of their sister Subhadrá between them, are worshipped in the temple of Jagannáth.

Bhágabat—an adorer of Bhagabán or Vishnu as God; the Bhágabat, the name of a Puran, regarded by the Vaishnavs as their Scripture.

Bhárati—the title of an order of monks.

Dhoti—a sheet of cloth worn round the lower limbs by Hindu males.

Gaur—(1) a city in the Malda district, the capital of Bengal during the Pathan period; also applied to the whole country of Bengal, (Gaur). (2) or Gauránga, a title of Chaitanya.

Ghee—melted butter. [This should be "clarified butter." - Editor]

Goswámi—a title of respect, usually given to spiritual leaders among the Vaishnavs.

Guru—spiritual preceptor, initiator into learning or a faith.

Haridás—a Muhammadan who had turned Vaishnav under Chaitanya's influence. There was another Haridas, a born Hindu, among Chaitanya's followers.

Jagannáth—or Lord of the Universe, name of the idol of Krishna worshipped in the temple at Puri; also applied to the town of Puri.

Kali yug—the present or iron age of the world.

Katak—the capital of Orissa and the seat of King Pratap Rudra of the Gajapati dynasty.

Kholan—instrument of music, being a long earthenware drum covered at both ends with leather; distinctive of the Bengali Vaishnavs.

Kirtan or sankirtan, chanting God's name to the accompaniment of dance and song.

Kulin—(1) a man of blue blood (kul), descended from a mythical ancestor of high character or social position in a very far-off age. (2) the name of a village in Bengal.

Kunda—a pool of water, sacred to some god or saint.

Lilá—the antic or sport of a god, particularly of Krishna.

Mádhav Pun—also Madhavendra, a monk, the spiritual guide of that Ishwar Puri who was the guru of Chaitanya.

Mahá-pátra—minister of the Rajah of Orissa.

Mahánta—the abbot of a Hindu monastery.

Niláchal—the Blue Mountain. Name of the mound on which the temple of Jagannáth at Puri is situated.

Nupur—bells tied to the feet in dancing.

Pándás—attendants at a temple (such as Jagannáth); they act as guides to pilgrims for a consideration.

Pandit—scholar, one versed in Sanskrit.

Prasád—food dedicated to a god at his worship, and thereafter eaten by the faithful as something holy.

Prayág—the town of Allahabad, at the junction of the Ganges and the Jamuna.

Prem—love, the highest form of bhakti or devotion.

Puri—(1) a town on the sea-coast in Orissa, containing the temple of Jagannáth. (2) the title of an order of monks.

Purushottam—a title of Vishnu; usually applied to the temple of Jagannáth at Puri.

Rárh—the upland of Burdwan and Birbhum districts, west of the Ganges.

Sárvabhauma—i.e., "universal doctor," a man of encyclopaedic knowledge. In the book this title is applied to a great scholar and Vedántic philosopher of Navadwip, who had settled at Puri and was held in high honour by the local king. His father was the scholar Visharád, a fellow-student of Chaitanya's maternal grandfather. His sister's husband was Gopinath Acharya, who, too, lived at Puri. Also called the Bhattáchárya, and Bhatta; not to be confounded with the Bhattáchárya (i.e., Balabhadra) of ch. xv-xxiii.

Shálgrám—a round dark pebble, worshipped as an emblem of Vishnu, (found in the Gandak river).

Shántipur—a town on the Ganges, some miles below Navadwip.

Shri-Vaishnav—one of the four main sects of the Vaishnavs; they adore Náráyan and Lakshmi (=Shri), instead of Krishna and Rádhá.

Shudra—the lowest caste among the Hindus.

Thug—a class of professional robbers who used to strangle or poison their victims, after mixing with them on the way, disguised as travellers.

Tulsi—(1) the Indian Basil plant, sacred to Vishnu, and venerated by the Vaishnavs as almost divine. "She is the Indian Daphne" (Birdwood). (2) the name of a minister of the king of Orissa.

Vidyá-nagar—Rajmahendri, in the Madras presidency.

Vrihaspati—the teacher of the gods; hence, a man versed in all the branches of learning.

Vishwarup—Chaitanya's elder brother, who turned a sannyási under the title of Shankaráyana and died in the monastery of Pandharpur in Southern India.

Yug—era or cycle of time.