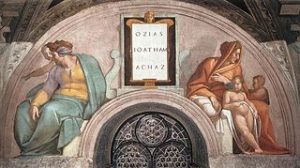 AHAZ (Heb. for “[Yahweh] holds”), son of Jotham, grandson of Uzziah or Azariah and king of Judah.  After the death of Menahem, Pekah, king of Israel, and Rezin (rather Rasun), king of Syria, allied against Assyria, invaded Judah, and laid siege to Jerusalem in the hope of setting up one of their puppets upon the throne.  At the same time the Edomites recovered Elath on the Gulf of Akabah (so read in 2 Kings xvi. 6; cp. also 2 Chron.  xxviii. 16 sqq.) and Judah was isolated.  Notwithstanding the counsel of Isaiah (Is. vii. 1-17), Ahaz lost heart and used the temple funds to call in the aid of Tiglath-pileser IV., who after attacking the Philistines destroyed the power of Syria, taking care to exact heavy tribute from Judah, which led to further despoliation of the temple.  It was as a vassal that Ahaz presented himself to the Assyrian king at Damascus, and he brought back religious innovations (2 Kings xvi. 10 sqq.; for the priest Urijah see Is. viii. 2) and new ideas to which he proceeded to give effect.  His buildings are referred to in 2 Kings xx. 11, xxiii. 12; cf. perhaps Jer. xxii. 15: “art thou a true king because thou viest with Ahaz” (see the LXX.).  Ahaz was succeeded by his son Hezekiah.