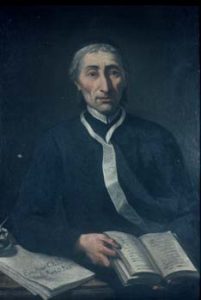 AMORT, EUSEBIUS (1692–1775), German Catholic theologian, was born at Bibermuhle, near Tolz, in Upper Bavaria, on the 15th of November 1692.  He studied at Munich, and at an early age joined the Canons Regular at Polling, where, shortly after his ordination in 1717, he taught theology and philosophy.  In 1733 he went to Rome as theologian to Cardinal Niccolo Maria Lercari (d. 1757).  He returned to Polling in 1735 and devoted the rest of his life to the revival of learning in Bavaria.  He died at Polling on the 5th of February 1775.

Amort, who had the reputation of being the most learned man of his age, was a voluminous writer on every conceivable subject, from poetry to astronomy, from dogmatic theology to mysticism.  His best known works are: a manual of theology in 4 vols., Theologia electica, moralis et scholastica (Augsburg, 1752; revised by Benedict XIV. for the 1753 edition published at Bologna); a defence of Catholic doctrine, entitled Demonstratio critica religionis Catholicae (Augsburg, 1751); a work on indulgences, which has often been criticized by Protestant writers, De Origine, Progressu, Valore, et Fructu Indulgentiorum (Augsburg, 1735); a treatise on mysticism, De Revelationibus et Visionibus, &c. (2 vols., 1744); and the astronomical work Nova philosophiae planetarum et artis criticae systemata (Nuremberg, 1723).  The list of his other works, including his three erudite contributions to the question of authorship of the Imitatio Christi, will be found in C. Toussaint’s scholarly article in A. Vacant’s Dict. de theologie (1900, cols. 1115-1117).