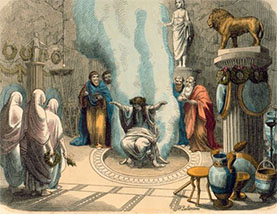 (Editor’s Note: this article was taken from Charles Wyllys Elliott’s Mysteries; or, Glimpses of the Supernatural, published in 1852 by Harper Brothers, New York. Elliott was a recognized scholar of his day, but naturally he refers to names [e.g., Mr. Bayle] with whom the modern reader will most probably be unfamiliar. Although we have edited the text slightly for clarity, we have not deleted these references, since the reader may find interest in researching them. Nor have we significantly changed Mr. Elliott’s grammar, even though his extensive use of exclamation points [!] may strike the modern reader as a bit unusual.)

On the subject of oracles, it may not be improper, once for all, to inform the American reader that the Apollo of Delphi was, to, use Mr. Bayle’s words, the judge without appeal; the greatest of the heathen gods, not preserving in relation to oracles his advantage or superiority.”

Let us, in a small way, satisfy the anxious inquirer as to the character of these oracular answers. Croesus, the king of the Lydians, says Herodotus determined to consult the different oracles of Greece, and also that of Libya. His motive in these consultations (praiseworthy surely) was, to form an idea of the truth of the oracles respectively. Of the oracular answers in general, we have no account remaining, but the Lydians had no sooner (!) entered the temple of Delphi, and proposed their questions, than the Pythian answered thus, in heroic verse:-

“I count the sand, I measure out the sea,
The silent and the dumb are heard by me;
E’en now the odors to my sense that rise,
A tortoise boiling with a lamb supplies;
While brass below and brass above it lies.”

Crœsus found none of the answers satisfactory except this: — “But a fervor of gratitude and piety was excited in him so soon as he heard the reply of the Pythian, and he exclaimed that there was no true oracle but Delphi, for this ‘alone had explained his employment at the stipulated time. ”

Lucian makes Jupiter complain of the great trouble the deities undergo on account of mankind. “As for Apollo,” says he, “he has undertaken a troublesome office; he is obliged to be at Delphi this minute, at Colophon the next, here at Delos, there at Branchidæ, just as his ministers choose to require him; not, to mention the tricks which are played to make trial of his sagacity, when people boil together the flesh of a lamb and a tortoise; so that if he had not had a very acute nose, Crœsus would have gone away and abused him.”

Crœsus desired to propitiate the deity, and made great and rich offerings and sacrifices, for he wished greatly to learn the result of an expedition which he projected against Persia. He received the following words from the oracle:-

“When o’er the Modes a mule shall sit on high,
O’er pebbly Hermus then, soft Lydian, fly;
Fly with all haste, for safety scorn thy fame,
Not scruple to deserve a coward’s name.”

The king was elated with, this reply, for the impossibility involved in the first line indicated to his pious heart that he must be successful; so he determined to attack Cyrus, whose successes provoked his jealousy.

Sad to tell, he failed; was defeated by Cyrus, attacked in his own capital, taken prisoner, condemned to death, and saved only by a miracle, viz., the magnanimity of his conqueror.

“Sir,” said he to Cyrus-and one can not but admire the gentlemanly tone of irony -” you will materially oblige me by your permission, to send these fetters to the god of Greece, whom, above all others, I have honored, and to inquire of him whether it be his rule to delude those who have claims on his kindness.”

The god neither flew into a passion, nor did he frown in dignified and cold contempt; on the contrary, inspired by the like lofty and gentlemanlike principle, he proceeded to apologize and explain. He said, “that to avoid the determination of destiny was impossible even for a divinity; that he had really obviated the decrees of fate as far as possible – indeed that of this Crœsus might be assured, that if the will of the fates had been punctually fulfilled, he would have been three years sooner a captive;” and much more which, if paraphrased to suit this time, might have read, “that he had done as well as he could under the circumstances; that men had no business to be asking foolish questions as to what was going to become of them; that some folks, it is true, squandered a good deal of money upon gods and their wire-pullers, but they might thank their stars that they were not worse off, and say nothing more about it!”

The king received the apology in good part, exculpated the god, and professed himself satisfied, – a termination not unlike what ensues when two “chivalrous fire-eaters,”‘ not to be appeased with any thing but “heart’s blood,” lay down their quills at the sound of the magic word “apology,” and drag along ever after-in the old ruts of custom and chicane.

Herodotus says, concerning the two oracles (namely, among the Greeks and in Libya) the Egyptians gave me the following account: “The priests of Jupiter, at Thebes, said that two holy women (literally -priestesses) were carried away from Thebes by the Phoenicians, and they had learned that one of them was sold in Libya and the other in Greece. And these women were the first founders of the oracles among these people.”

The Oracle at Delphi

But of all oracles, that of Apollo Pythius, at Delphi, was the most celebrated.

This divine institution was first suggested by a, goat-herd’s observing some of his flock to frisk in a remarkable manner, near the entrance of a cave on Mount Parnassus. Investigating the matter, he, too, was seized with a like spiritual madness, and began to dance and skip and prophesy. The thing spreading and gaining fame, it was taken in hand by persons in authority; a magnificent temple was built over it, and the holy madness was only experienced by a pure virgin, till such time as one having been debauched by Echecrates, it became necessary to choose, as the Pythia or priestess, one above the age of fifty years, who, if not too cool to be tempted, was at least secure from detection – and so religion and the oracle could be preserved from contempt.

She sat on a tripod over the mouth of the cavern, having first fasted, and bathed in the fountain of Castalia, and perhaps eaten the laurel leaves; She in the violent enthusiasm which ensued, rehearsed the dark and, mysterious verses, which sometimes proceeding from the stomach or belly in an incoherent form, were reshaped and handed over to the devout, by the anointed priests or prophets.

Mr. Bayle observes that at first it gave its answers in verse, and that it fell into prose upon the people’s beginning to laugh at the poorness of its versification! The Epicureans made it the subject of their jests, saying, that it was surprising how Apollo, the patron of the poets, should himself be so much poorer a poet than Homer whom he had inspired.

There exist those who have said that the Pythia was as other women are, or have been, extortioners, unjust, deceitful. Themistocles and Demosthenes are said to have had suspicions, and the latter bade the Athenians to remember that Pericles and Epaminondas, instead of amusing themselves with the answers of the oracle, consulted only reason in the choice and execution of their measures. Can we wonder that the dogs barked, and the children cried infidel, at such a scorner?

Eusebius tells us of a philosopher, one Aenomaus, who, at least, can not be charged with fear, who speaks thus to Apollo: “When we come to consult thee, if thou seest what is in futurity, why dost thou use expressions that will not be understood ? If -things must necessarily come to pass, why, dost thou amuse us with thy ambiguities? What dost thou, wretch as thou art, at Delphi?- muttering idle prophecies!”

The great riches of this shrine, amassed by the offerings and payments of worshipers, made it a prize for the unbelievers. The Gauls, under Brennus, two hundred and seventy-eight years before Christ, attacked it; and Nero, at last, robbed it of five hundred of its most precious statues – sic transit gloria mundi! Where is Apollo – and where the oracle!

Most of the pagan deities had these oracles: Apollo had the greatest number.

Isis, Osiris and Serapis delivered, in like manner, their oracles by dreams, etc.

At the oracle of Ammon, the priests delivered the response of their god.

At Dodona (Jupiter’s), the answer came from the hollow of an oak.

At the cave of Trophonius, the answer was inferred from what the suppliant said when he recovered from his senses.

At Memphis, it was good or bad, according as the ox Apis received or refused what was offered, etc.

Oracles were frequently given by lot.

Ablancourt says, that the study or research of the meaning of oracles, was but a fruitless thing; and that they were never understood till after their accomplishment! What would he have said about other holy prophecies? We may well wonder.

Their answers were carefully doubled – and might have one of two or more meanings. This was certainly wise, and indicated that the oracle was not a fool, whatever might have been thought or said of its questioners.

When Alexander was sick at Babylon, some of his courtiers asked of the oracle at Serapis if it would not be well to bring the conqueror to be cured by the god. The reply was, that it was better that he should remain where he was.

The fatigue of the journey might have killed him, or he might have died in the temple, which would have been bad for the god as well as the king; but if he died at Babylon it was only necessary to say, that he died at the proper place and time; if he recovered, what glory would accrue to the god for saving him?

Mr. Bayle says positively they were mere human artifices in which the Devil had no hand – he was strongly supported by Van Dale and Fontenelle who wrote upon the subject. Bishop Sherlock, however, in his “Discourses upon Prophecy,” says it is impious to disbelieve the heathen oracles as having been given out by, the Devil or demons, while Dr. Middleton says that he then is guilty of this impiety, and thinks himself warranted to pronounce from the authority of the best and wisest of the heathen themselves, and the evidence of plain facts which are recorded of these oracles, as well as from the nature of the thing itself, that they were all mere imposture, wholly invented and supported by human craft, without any supernatural aid or interposition whatsoever! A bold man this Middleton and plain-spoken.

When did the oracles cease? Eusebius endeavors to show that the oracles became dumb upon the coming of Christ – yet as it appears by the laws of Theodosius, Gratian, and Valentinian, that they were consulted as late as the year 358 AD, he is not altogether conclusive; and Cicero, being a heathen, gives this explanation, that they ceased in proportion as the people growing less credulous, began to suspect them for cheats.

Most of the church fathers supposed that it was the Devil who spoke in the oracles, and Vassius thinks that the obscurity of the answers was owing to his ignorance of what God intended to do!

No nation of which we may have any history was without something which they agreed to believe when sore straitened to know what was what – nor is there any now but what has such a thing after some sort.