Aradia, or Gospel of the Witches 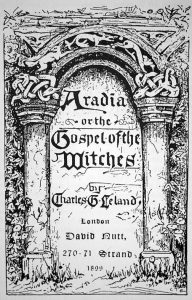 If the reader has ever met with the works of the learned folklorist G. Pitré, or the articles contributed by “Lady Vere De Vere” to the Italian Rivista, or that of J. H. Andrews to Folk-Lore, he will be aware that there are in Italy great numbers of strege, fortune-tellers or witches, who divine by cards, perform strange ceremonies in which spirits are supposed to be invoked, make and sell amulets, and, in fact, comport themselves generally as their reputed kind are wont to do, be they Black Voodoos in America or sorceresses anywhere.

But the Italian strega or sorceress is in certain respects a different character from these. In most cases she comes of a family in which her calling or art has been practiced for many generations. I have no doubt that there are in stances in which the ancestry remounts to medieval, Roman, or it may be Etruscan times. The result has naturally been the accumulation in such families of much tradition. But in Northern Italy, as its literature indicates, though there has been some slight gathering of fairy tales and popular superstitions by scholars, there has never existed the least interest as regarded the strange lore of the witches, nor any suspicion that it embraced an incredible quantity of old Roman minor myths and legends, such as Ovid has recorded, but of which much escaped him and all other Latin writers.

This ignorance was greatly aided by the wizards themselves, in making a profound secret of all their traditions, urged thereto by fear of the priests. In fact, the latter all unconsciously actually contributed immensely to the preservation of such lore, since the charm of the forbidden is very great, and witchcraft, like the truffle, grows best and has its raciest flavor when most deeply hidden. However this may be, both priest and wizard are vanishing now with incredible rapidity-it has even struck a French writer that a Franciscan in a railway carriage is a strange anomaly-and a few more years of newspapers and bicycles (Heaven knows what it will be when flying-machines appear!) will probably cause an evanishment of all.

However, they die slowly, and even yet there are old people in the Romagna of the North who know the Etruscan names of the Twelve Gods, and invocations to Bacchus, Jupiter, and Venus, Mercury, and the Lares or ancestral spirits, and in the cities are women who prepare strange amulets, over which they mutter spells, all known in the old Roman time, and who can astonish even the learned by their legends of Latin gods, mingled with lore which may be found in Cato or Theocritus. With one of these I became intimately acquainted in 1886, and have ever since employed her specially to collect among her sisters of the hidden spell in many places all the traditions of the olden time known to them. It is true that I have drawn from other sources, but this woman by long practice has perfectly learned what few understand, or just what I want, and how to extract it from those of her kind. Among other strange relics, she succeeded, after many years, in obtaining the following “Gospel,” which I have in her handwriting. A full account of its nature with many details will be found in an Appendix. I do not know definitely whether my informant derived a part of these traditions from written sources or oral narration, but believe it was chiefly the latter. However, there are a few wizards who copy or preserve documents relative to their art. I have not seen my collector since the “Gospel” was sent to me. I hope at some future time to be better informed.

For brief explanation I may say that witch craft is known to its votaries as la vecchia religione, or the old religion, of which Diana is the Goddess, her daughter Aradia (or Herodias) the female Messiah, and that this little work sets forth how the latter was born, came down to earth, established witches and witchcraft, and then returned to heaven. With it are given the ceremonies and invocations or incantations to be addressed to Diana and Aradia, the exorcism of Cain, and the spells of the holy-stone, rue, and verbena, constituting, as the text declares, the regular church-service, so to speak, which is to be chanted or pronounced at the witch-meetings. There are also included the very curious incantations or benedictions of the honey, meal, and salt, or cakes of the witch-supper, which is curiously classical, and evidently a relic of the Roman Mysteries.

The work could have been extended ad infinitum by adding to it the ceremonies and incantations which actually form a part of the Scripture of Witchcraft, but as these are nearly all-or at least in great number-to be found in my works entitled Etruscan-Roman Remains and Legends of Florence, I have hesitated to compile such a volume before ascertaining whether there is a sufficiently large number of the public who would buy such a work.

Since writing the foregoing I have met with and read a very clever and entertaining work entitled Il Romanzo dei Settimani, G. Cavagnari, 1889, in which the author, in the form of a novel, vividly depicts the manners, habits of thought, and especially the nature of witchcraft, and the many superstitions current among the peasants in Lombardy. Unfortunately, notwithstanding his extensive knowledge of the subject, it never seems to have once occurred to the narrator that these traditions were anything but noxious nonsense or folly.

That there exists in them marvelous relics of ancient mythology and valuable folklore, is as uncared for by him as it would be by a common Zoccolone. One would think it might have been suspected by a man who knew that a witch really endeavored to kill seven people as a ceremony or rite, in order to get the secret of endless wealth, that such a sorceress must have had a store of wondrous legends; but of all this there is no trace, and it is very evident that nothing could be further from his mind than that there was anything interesting from a higher or more genial point of view in it all.

His book, in fine, belongs to the very great number of those written on ghosts and superstition since the latter has fallen into discredit, in which the authors indulge in much satirical and very safe but cheap ridicule of what to them is merely vulgar and false. Like Sir Charles Coldstream, they have peeped into the crater of Vesuvius after it had ceased to “erupt,” and found “nothing in it.” But there was something in it once; and the man of science, which Sir Charles was not, still finds a great deal in the remains, and the antiquarian a Pompeii or a Herculaneum – it is said there are stillseven buried cities to unearth. I have done what little (it is really very little) I could, to disinter something from the dead volcano of Italian sorcery.

If this be the manner in which Italian witchcraft is treated by the most intelligent writer who has depicted it, it will not be deemed remarkable that there are few indeed who will care whether there is a veritable Gospel of Witches, apparently of extreme antiquity, embodying the belief in a strange counter-religion which has held its own from prehistoric time to the present day. “Witchcraft is all rubbish, or something worse,” said old writers, “and therefore all books about it are nothing better.” I sincerely trust, however, that these pages may fall into the hands of at least a few who will think better of them.

I should, however, in justice to those who do care to explore dark and bewildering paths, explain clearly that witch-lore is hidden with most scrupulous care from all save a very few in Italy, just as it is among the Chippewa Medas or the Black Voodoo. In the novel to the life of I Settimani an aspirant is represented as living with a witch and acquiring or picking up with pain, scrap by scrap, her spells and incantations, giving years to it. So my friend the late M. Dragomanoff told me how a certain man in Hungary, having learned that he had collected many spells (which were indeed subsequently published in folklore journals), stole into the scholar’s room and surreptitiously copied them, so that the next year when Dragomanoff returned, he found the thief in full practice as a blooming magician. Truly he had not got many incantations, only a dozen or so, but a very little will go a great way in the business, and I venture to say there is perhaps hardly a single witch in Italy who knows as many as I have published, mine having been assiduously collected from many, far and wide. Everything of the kind which is written is, moreover, often destroyed with scrupulous care by priests or penitents, or the vast number who have a superstitious fear of even being in the same house with such documents, so that I regard the rescue of the Gospel of the Witches as something which is to say the least remarkable.