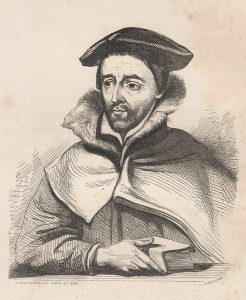 [This is taken from the History of the Catholic Church.]

The Catholic doctrine on Grace, round which such fierce controversies had been waged in the fifth and sixth centuries, loomed again into special prominence during the days of the Reformation. The views of Luther and Calvin on Grace and Justification were in a sense the very foundation of their systems, and hence it was of vital importance that these questions should be submitted to a searching examination, and that the doctrine of the Catholic Church should be formulated in such a way as to make misunderstanding impossible. This work was done with admirable lucidity and directness in the fifth and sixth sessions of the Council of Trent, but nevertheless these decrees of the Council did not prevent the theories of Luther and Calvin being propagated vigorously, and from exercising a certain amount of influence even on some Catholic theologians who had no sympathy with the religious revolt.

Amongst these might be reckoned Michael Baius (De Bay, 1513-89) a professor at the University of Louvain and John Hessels, one of his supporters in the theological controversies of the day. They believed that Catholic apologists were handicapped seriously by their slavish regard for the authority and methods of the Scholastics, and that if instead of appealing to the writings of St. Thomas as the ultimate criterion of truth they were to insist more on the authority of the Bible and of the works of the Early Fathers, such as St. Cyprian, St. Jerome, and St. Augustine, they would find themselves on much safer ground, and their arguments would be more likely to command the respect of their opponents. Hence at Louvain, in their own lectures, in their pamphlets, and in private discussions, they insisted strongly that Scholasticism should make way for positive theology, and that the Scriptures and patristic literature should take the place of the Summa. Not content, however, with a mere change of method they began to show their contempt for traditional opinions, and in a short time alarming rumors were in circulation both inside and outside the university that their teaching on Original Sin, Grace, and Free-will, was not in harmony with the doctrine of the Church. The Franciscans submitted to the judgment of the Sorbonne a number of propositions (18) selected from the writings or lectures of Baius and his friends, and the opinion of the Sorbonne was distinctly unfavorable. As the dispute grew more heated and threatened to have serious consequences for the university and the country, Cardinal Granvelle, believing that the absence of the two professors might lead to peace, induced both to proceed to the Council of Trent as the theologians of the King of Spain (1563). Though the opinions of Baius found little sympathy with the Fathers of Trent, yet since the subjects of Original Sin and Grace had been discussed and defined already, nothing was done. On his return (1564) from the Council of Trent Baius published several pamphlets in explanation and defense of his views, all of which were attacked by his opponents, so that in a short time the university was split into two opposing camps.

To put an end to the trouble the rector determined to seek the intervention of Rome. In October 1567 Pius V. issued the Bull, Ex omnibus afflictionibus, in which he condemned seventy-nine propositions selected from the writings or lectures of Baius without mentioning the author’s name. The friends of Baius raised many difficulties regarding the reception and the interpretation of the papal document, and though Baius himself professed his entire submission to the decision, the tone of his letter to the Pope was little short of offensive. The Pope replied that the case having been examined fully and adjudged acceptance of the decision was imperative. Once more Baius announced his intention of submitting (1569), and so confident were his colleagues of his orthodoxy that he was appointed dean of the theological faculty, and later on chancellor of the university. But his actions did not correspond with his professions. Various arguments were put forward to weaken the force of the papal condemnation until at last Gregory XIII. was forced to issue a new Bull, Provisionis nostrae (1579), and to send the learned Jesuit, Francisco Toledo, to demand that Baius should abjure his errors, and that the teaching of Pius V. should be accepted at Louvain. The papal letter was read in a formal meeting of the university, whereupon Baius signed a form of abjuration, by which he acknowledged that the condemnation of the propositions was just and reasonable, and that he would never again advocate such views. This submission relieved the tension of the situation, but it was a long time before the evil influence of Baianism disappeared, and before peace was restored finally to Louvain.

The system propounded by Baius had much in common with the teaching of Pelagius, Luther, and Calvin. His failure to recognize the clear distinction between the natural and the supernatural was the source of most of his errors. According to him the state of innocence in which our first parents were created, their destination to the enjoyment of the Beatific Vision, and all the gifts bestowed upon them for the attainment of this end were due to them, so that had they persevered during life they should have merited eternal happiness as a reward for their good works. When, however, man sinned by disobedience he not merely lost gratuitous or supernatural endowments, but his whole nature was weakened and corrupted by Original Sin which, in the system of Baius, was to be identified with concupiscence, and which was transmitted from father to son according to the ordinary laws of heredity. This concupiscence, he contended, was in itself sinful, as was also every work which proceeds from it. This was true even in case of children, because that an act be meritorious or demeritorious Free Will was not required. So long as the act was done voluntarily even though necessarily, it was to be deemed worthy of reward or punishment, since freedom from external compulsion was alone required for moral responsibility.

From the miserable condition into which man had fallen he was rescued by the Redemption of Christ, on account of which much that had been forfeited was restored. These graces procured for man by Christ may be called supernatural, not because they were not due to human nature, but because human nature had been rendered positively unworthy of them by Original Sin. The justice, however, by which a man is justified, consisted not in any supernatural quality infused into the soul, by which the individual was made a participator of the divine nature, but implied merely a condition in which the moral law was observed strictly. Hence justification, according to Baius, could be separated from the forgiveness of guilt, so that though the guilt of the sinner may not have been remitted still he may be justified. In sin two things were to be distinguished, the act and the liability to punishment. The act could never be effaced, but the temporal punishment was remitted by the actual reception of the sacraments, which were introduced by Christ solely for that purpose. The Mass possessed, he held, any efficacy that it had only because it was a good moral act and helped to draw us more closely to God.