Bushido As an Ethical System 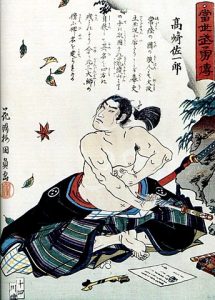 [This is taken from Inazo Nitobe’s Bushido, The Soul of Japan, originally published in English in 1900.]

Chivalry is a flower no less indigenous to the soil of Japan than its emblem, the cherry blossom; nor is it a dried-up specimen of an antique virtue preserved in the herbarium of our history. It is still a living object of power and beauty among us; and if it assumes no tangible shape or form, it not the less scents the moral atmosphere, and makes us aware that we are still under its potent spell. The conditions of society which brought it forth and nourished it have long disappeared; but as those far-off stars which once were and are not, still continue to shed their rays upon us, so the light of chivalry, which was a child of feudalism, still illuminates our moral path, surviving its mother institution. It is a pleasure to me to reflect upon this subject in the language of Burke, who uttered the well-known touching eulogy over the neglected bier of its European prototype.

It argues a sad defect of information concerning the Far East, when so erudite a scholar as Dr. George Miller did not hesitate to affirm that chivalry, or any other similar institution, has never existed either among the nations of antiquity or among the modern Orientals. Such ignorance, however, is amply excusable, as the third edition of the good Doctor’s work appeared the same year that Commodore Perry was knocking at the portals of our exclusivist realm. More than a decade later, about the time that our feudalism was in the last throes of existence, Carl Marx, writing his “Capital,” called the attention of his readers to the peculiar advantage of studying the social and political institutions of feudalism, as then to be seen in living form only in Japan. I would likewise invite the Western historical and ethical student to the study of chivalry in the Japan of the present.

Enticing as is a historical disquisition on the comparison between European and Japanese feudalism and chivalry, it is not the purpose of this paper to enter into it at length. My attempt is rather to relate, firstly, the origin and sources of our chivalry; secondly, its character and teaching; thirdly, its influence among the masses; and, fourthly, the continuity and permanence of its influence. Of these several points, the first will be only brief and cursory, or else I should have to take my readers into the devious paths of our national history; the second will be dwelt upon at greater length, as being most likely to interest students of International Ethics and Comparative Ethnology in our ways of thought and action; and the rest will be dealt with as corollaries.

The Japanese word which I have roughly rendered Chivalry, is, in the original, more expressive than Horsemanship. Bu-shi-do means literally Military-Knight-Ways—the ways which fighting nobles should observe in their daily life as well as in their vocation; in a word, the “Precepts of Knighthood,” the noblesse oblige of the warrior class. Having thus given its literal significance, I may be allowed henceforth to use the word in the original. The use of the original term is also advisable for this reason, that a teaching so circumscribed and unique, engendering a cast of mind and character so peculiar, so local, must wear the badge of its singularity on its face; then, some words have a national timbre so expressive of race characteristics that the best of translators can do them but scant justice, not to say positive injustice and grievance. Who can improve by translation what the German “Gemüth” signifies, or who does not feel the difference between the two words verbally so closely allied as the English gentleman and the French gentilhomme?

Bushido, then, is the code of moral principles which the knights were required or instructed to observe. It is not a written code; at best it consists of a few maxims handed down from mouth to mouth or coming from the pen of some well-known warrior or savant. More frequently it is a code unuttered and unwritten, possessing all the more the powerful sanction of veritable deed, and of a law written on the fleshly tablets of the heart. It was founded not on the creation of one brain, however able, or on the life of a single personage, however renowned. It was an organic growth of decades and centuries of military career. It, perhaps, fills the same position in the history of ethics that the English Constitution does in political history; yet it has had nothing to compare with the Magna Charta or the Habeas Corpus Act. True, early in the seventeenth century Military Statutes (Buké Hatto) were promulgated; but their thirteen short articles were taken up mostly with marriages, castles, leagues, etc., and didactic regulations were but meagerly touched upon. We cannot, therefore, point out any definite time and place and say, “Here is its fountain head.” Only as it attains consciousness in the feudal age, its origin, in respect to time, may be identified with feudalism. But feudalism itself is woven of many threads, and Bushido shares its intricate nature. As in England the political institutions of feudalism may be said to date from the Norman Conquest, so we may say that in Japan its rise was simultaneous with the ascendancy of Yoritomo, late in the twelfth century. As, however, in England, we find the social elements of feudalism far back in the period previous to William the Conqueror, so, too, the germs of feudalism in Japan had been long existent before the period I have mentioned.

Again, in Japan as in Europe, when feudalism was formally inaugurated, the professional class of warriors naturally came into prominence. These were known as samurai, meaning literally, like the old English cniht (knecht, knight), guards or attendants—resembling in character the soldurii whom Caesar mentioned as existing in Aquitania, or the comitati, who, according to Tacitus, followed Germanic chiefs in his time; or, to take a still later parallel, the milites medii that one reads about in the history of Mediaeval Europe. A Sinico-Japanese word Bu-ké or Bu-shi (Fighting Knights) was also adopted in common use. They were a privileged class, and must originally have been a rough breed who made fighting their vocation. This class was naturally recruited, in a long period of constant warfare, from the manliest and the most adventurous, and all the while the process of elimination went on, the timid and the feeble being sorted out, and only “a rude race, all masculine, with brutish strength,” to borrow Emerson’s phrase, surviving to form families and the ranks of the samurai. Coming to profess great honor and great privileges, and correspondingly great responsibilities, they soon felt the need of a common standard of behavior, especially as they were always on a belligerent footing and belonged to different clans. Just as physicians limit competition among themselves by professional courtesy, just as lawyers sit in courts of honor in cases of violated etiquette, so must also warriors possess some resort for final judgment on their misdemeanors.

Fair play in fight! What fertile germs of morality lie in this primitive sense of savagery and childhood. Is it not the root of all military and civic virtues? We smile (as if we had outgrown it!) at the boyish desire of the small British youth, Tom Brown, “to leave behind him the name of a fellow who never bullied a little boy or turned his back on a big one.” And yet, who does not know that this desire is the corner-stone on which moral structures of mighty dimensions can be reared? May I not go even so far as to say that the gentlest and most peace-loving of religions endorses this aspiration? This desire of Tom’s is the basis on which the greatness of England is largely built, and it will not take us long to discover that Bushido does not stand on a lesser pedestal. If fighting in itself, be it offensive or defensive, is, as Quakers rightly testify, brutal and wrong, we can still say with Lessing, “We know from what failings our virtue springs.”

“Sneaks” and “cowards” are epithets of the worst opprobrium to healthy, simple natures. Childhood begins life with these notions, and knighthood also; but, as life grows larger and its relations many-sided, the early faith seeks sanction from higher authority and more rational sources for its own justification, satisfaction and development. If military interests had operated alone, without higher moral support, how far short of chivalry would the ideal of knighthood have fallen! In Europe, Christianity, interpreted with concessions convenient to chivalry, infused it nevertheless with spiritual data. “Religion, war and glory were the three souls of a perfect Christian knight,” says Lamartine.