[This is taken from Florence Scovel Shinn’s The Game of Life.] 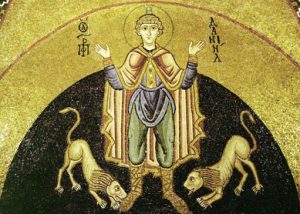 When man knows his own powers and the workings of his mind, his great desire is to find an easy and quick way to impress the subconscious with good, for simply an intellectual knowledge of the Truth will not bring results.  In my own case, I found the easiest way is in “casting the burden.”

A metaphysician once explained it in this manner. He said, “The only thing which gives anything weight in nature, is the law of gravitation, and if a boulder could be taken high above the planet, there would be no weight in that boulder; and that is what Jesus Christ meant when he said: “My yoke is easy and my burden is light.”

He had overcome the world vibration, and functioned in the fourth dimensional realm, where there is only perfection, completion, life and joy.

He said: “Come to me all ye that are labor and are heavy laden, and I will give you rest.” “Take my yoke upon you, for my yoke is easy and my burden is light.”

We are also told in the fifty-fifth Psalm, to “cast thy burden upon the Lord.” Many passages in the Bible state that the battle is God’s not man’s and that man is always to “stand still” and see the Salvation of the Lord.

This indicates that the superconscious mind (or Christ within) is the department which fights man’s battle and relieves him of burdens.

It seems almost impossible to make any headway directing the subconscious from the conscious, or reasoning mind, as the reasoning mind (the intellect) is limited in its conceptions, and filled with doubts and fears.

How scientific it then is, to cast the burden upon the superconscious mind (or Christ within) where it is “made light,” or dissolved into its native nothingness.”

For example: A woman in urgent need of money, “made light” upon the Christ within, the superconscious, with the statement, “I cast this burden of lack on the Christ (within) and I go free to have plenty!”

The belief in lack was her burden, and as she cast it upon the Superconscious with its belief of plenty, an avalanche of supply was the result.

We read, “The Christ in you the hope of glory.”

Another example: One of my students had been given a new piano, and there was no room in her studio for it until she had moved out the old one. She was in a state of perplexity. She wanted to keep the old piano, but knew of no place to send it. She became desperate, as the new piano was to be sent immediately; in fact, was on its way, with no place to put it. She said it came to her to repeat, “I cast this burden on the Christ within, and I go free.”

A few moments later, her ‘phone rang, and a woman friend asked if she might rent her old piano, and it was moved out, a few minutes before the new one arrived.

I knew a woman, whose burden was resentment. She said, “I cast this burden of resentment on the Christ within, and I go free, to be loving, harmonious and happy.” The Almighty superconscious, flooded the subconscious with love, and her whole life was changed. For years, resentment had held her in a state of torment and imprisoned her soul (the subconscious mind).

The statement should be made over and over and over, sometimes for hours at a time, silently or audibly, with quietness but determination.

I have often compared it to winding-up a Victrola. We must wind ourselves up with spoken words.

I have noticed, in “casting the burden,” after a little while, one seems to see clearly. It is impossible to have clear vision, while in the throes of carnal mind. doubts and fear poison the mind and body and imagination runs riot, attracting disaster and disease.

In steadily repeating the affirmation, “I cast this burden on the Christ within, and go free,” the vision clears, and with it a feeling of relief, and sooner or later comes the manifestation of good, be it health, happiness or supply.

One of my students once asked me to explain the “darkness before the dawn.” I referred in a preceding chapter to the fact that often, before the big demonstration “everything seems to go wrong,” and deep depression clouds the consciousness. It means that out of the subconscious are rising the doubts and fears of the ages. These old derelicts of the subconscious rise to the surface, to be put out.

It is then that man should clap his cymbals, like Jehoshaphat, and give thanks that he is saved, even though he seems surrounded by the enemy (the situation of lack or disease). The student continued, “How long must one remain in the dark” and I replied, “until one can see in the dark, and “casting the burden enables one to see in the dark.”

In order to impress the subconscious, active faith is always essential.

“Faith without works is dead.” In these chapters I have endeavored to bring out this point.

Jesus Christ showed active faith when “He commanded the multitude to sit down on the ground,” before he gave thanks for the loaves and fishes.

I will give another example showing how necessary this step is. In fact, active faith is the bridge, over which man passes to his Promised Land.

Through misunderstanding, a woman had been separated from her husband, whom she love deeply. He refused all offers of reconciliation and would not communicate with her in any way.

Coming into the knowledge of Spiritual law, she denied the appearance of separation. She made this statement: “There is no separation in Divine Mind, therefore, I cannot be separated form the love and companionship which are mine by divine right.”

She showed active faith by arranging a place for him at the table every day; thereby impressing the subconscious with a picture of his return. Over a year passed, but she never wavered, and one day he walked in.

The subconscious is often impressed through music. Music has a fourth dimensional quality and releases the soul from imprisonment. It makes wonderful things seem possible, and easy of accomplishment!

I have a friend who uses her Victrola, daily, for this purpose. It puts her in perfect harmony and releases the imagination.

Another woman often dances while making her affirmations. The rhythm and harmony of music and motion carry her words forth with tremendous power.

The student must remember also, not to despise the “day of small things.”

Invariably, before a demonstration, come “signs of land.”

Before Columbus reached America, he saw birds and twigs which showed him land was near. So it is with a demonstration; but often the student mistakes it for the demonstration itself, and is disappointed.

For example: A woman had “spoken the word” for a set of dishes. Not long afterwards a friend gave her a dish which was old and cracked.

She came to me and said, “Well, I asked for a set of dishes, and all I got was a cracked plate.”

I replied, “The plate was only signs of land. It shows your dishes are coming – look upon it as a birds and seaweed,” and not long afterwards the dishes came.

Children are always “making believe,” and “except ye be converted, and become as little children, ye shall not enter the Kingdom of Heaven.”

For example: I know of a woman who was very poor, but no one could make her feel poor. She earned a small amount of money from rich friends, who constantly reminded her of her poverty, and to be careful and saving. Regardless of their admonitions, she would spend all her earnings on a hat, or make someone a gift, and be in a rapturous state of mind. Her thoughts were always centered on beautiful clothes and “rings and things,” but without envying others.

She lived in the world of the wondrous, and only riches seemed real to her. Before long she married a rich man, and the rings and things became visible. I do not know whether the man was the “Divine Selection,” but opulence had to manifest in her life, as she had imaged only opulence.

There is no peace or happiness for man, until he has erased all fear from the subconscious.

Fear is misdirected energy and must be redirected, or transmuted into Faith.

Jesus Christ said, “Why are ye fearful, O ye of little faith?” “All things are possible to him that believeth.”

I am asked, so often by my students, “How can I get rid of fear?”

I reply, “By walking up to the thing you are afraid of.”

“The lion takes its fierceness from your fear.”

Walk up to the lion, and he will disappear; run away and he runs after you.

The lion of lack disappeared when the individual spent money fearlessly, showing faith that God was his supply and therefore, unfailing.

Many of my students have come out of the bondage of poverty, and are now bountifully supplied, through losing all fear of letting money go out. The subconscious is impressed with the truth that God is the Giver and Gift; therefore as one is one with the Giver, he is one with the Gift. A splendid statement is, “I now thank God the Giver for God the Gift.”

Man has so long separated himself from his good and his supply, through thoughts of separation and lack, that sometimes, it takes dynamite to dislodge these false ideas from the subconscious, and the dynamite is a big situation.

We see in the foregoing illustration, how the individual was freed from his bondage by showing fearlessness.

Man should watch himself hourly to detect if his motive for action is fear or faith.

“Choose ye this day whom we shall serve,” fear or faith.

Perhaps one’s fear is of personality. Then do not avoid the people feared; be willing to meet them cheerfully, and they will either prove “golden links in the chain of one’s good,” or disappear harmoniously from one’s pathway.

Perhaps one’s fear is of disease or germs. Then one should be fearless and undisturbed in a germ-laden situation, and he would be immune.

One can only contract germs while vibrating at the same rate as the germ, and fear drags men down to the level of the germ. Of course, the disease laden germ is the product of carnal mind, as all thought must objectify. Germs do not exist in the superconscious or Divine Mind, therefore are the product of man’s “vain imagination.”

“In the twinkling of an eye,” man’s release will come when he realizes there is no power in evil.

The material world will fade away, and the fourth dimensional world, the “World of the Wondrous,” will swing into manifestation.

“And I saw a new heaven, and a new earth – and there shall be no more death, neither sorrow nor crying, neither shall there be any more pain; for the former things are passed away.”