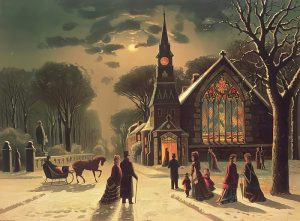 “In today’s consumer society, this time of the year unfortunately suffers from a sort of commercial ‘pollution’ that threatens to alter its real spirit.”
Pope Benedict XVI, December 11th, 2005

We cannot disagree with Pope Benedict’s assertion.  Commercialism – at least, the raging hyper-consumerism that is so prevalent in the United States during the Christmas holiday season – does not seem to have anything to do with the spirit of Christmas, or the spirit of Christianity.  In fact, such hyper-consumerism appears to be directly opposed to Christ’s message.

Christmas presents have, in a sense, existed since the very first Christmas.  We read in the second chapter of Matthew that the Magi, “….saw the young child with Mary his mother, and fell down, and worshiped him: and when they had opened their treasures, they presented unto him gifts; gold, and frankincense, and myrrh.”  But these, of course, were gifts to one regarded as the Savior.

Christianity, as a religion, embraces the idea that we are all brothers and sisters, not only equal to each other, but also responsible for each other’s welfare, even the “least and the poorest among us.”  Numerous examples of this stress on equality and compassion exist in the New Testament, along with clear warnings against vain demonstrations of opulence.  We are told in Mark, chapter 10, that ” . . . many that are first shall be last; and the last first.”  The same chapter tells us that, “It is easier for a camel to go through the eye of a needle, than for a rich man to enter into the kingdom of God.”  Both sentiments are repeated virtually word-for-word in Matthew, chapter 19.  We are also told that the poor are blessed, and the meek shall inherit the earth.

How, then, can one justify celebrating the birth of the religious figure who taught such lofty ideals with stampeding (and occasionally violent) crowds at Wal-Mart?  Where in the New Testament does Jesus command his followers to run up credit card debt at jewelry stores?  What does giving a bottle of expensive Scotch have to do with the birth of Christ?

Puritans, who played an incredibly important role in the founding of the United States, felt that Christmas was a celebration tainted by heathenism; they regarded the day as any other workday, and in fact recommended that one should work all the harder on December 25th.  Quakers, another influential group in American history, likewise chose not to regard Christmas as a special holy day, for the simple reason that Quakers regard all days as holy.  That these sentiments endured in some history-rich areas of the United States is demonstrated by the fact that Christmas was not publicly celebrated in New England until a point well into the 19th century.

Even if we choose to disagree with Puritans and Quakers – and one must admit that their ideas bear merit, especially given the sorry spectacle we are faced with today – we still ought to try to face the fact that Christmas is a holy day, a spiritual day, and has nothing at all to do with buying things.  Indeed, the hyper-consumerism presently associated with Christmas flies in the face of true Christianity.

Want to do something truly “Christmas-like” this season?  Then first, make a pledge to avoid the malls, and the jewelry stores, the Wal-marts and the Targets.  Second, go to church, or to meeting, or stay home and read the Bible.  Christmas is about honoring the birth of Christ, isn’t it?  Third, purge your heart of all anger, all hatred, and all prejudice toward those who are different from you, be it because of their race, or their religious beliefs, or their political beliefs, or anything else, choosing instead to love your neighbor as yourself.  And finally, fourth, do those other things Jesus clearly instructed us to do; feed the hungry, clothe the naked, heal the sick.

Merry Christmas, and may God bless us all.

(For another perspective on this issue, readers may wish to refer to Charles Dudley Warner’s 1904 essay on the DJMcAdam website,  The Burden of Christmas. )