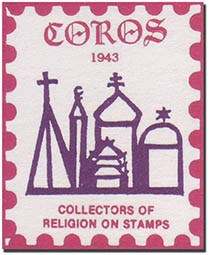 Collectors of Religion on Stamps

Put simply, we are unsure of the current status of COROS. Organized in 1943, COROS is – or was – the oldest topical philatelic society in the USA.  The organization’s journal has been published continuously since 1945.  Popular topics in print include Christmas, the Bible, the Pope, Churches, the Madonna, Saints, Reformation, new issues, checklists, studies, and much more. COROS also published a 40-page quarterly called The COROS Chronicle, for which annual dues were collected.

According to Verna Shackleton, who had been COROS Secretary, COROS is (or was):  “A philatelic society dedicated to the study of postal material featuring designs of some religious significance.”

At any rate, the COROS website is no longer there, and other links, including a link at the American Topical Society, have not worked. If we learn more, we’ll let our readers know.

Religious Philately, on this site