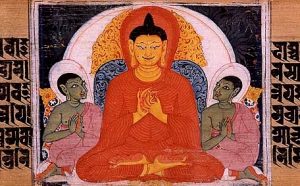 The Four Noble Truths of Buddhism are:

J. Barthelemy Saint-Hilaire, who was not overly sympathetic to Buddhism, had this to say about the four noble truths in his book, Buddha and His Religion (1914):

The following are the four truths:

First, the state of suffering which assails man under some form or another, whatever may be the condition of his birth.  This is unfortunately an undeniable fact, although it does not entail all the consequences that Buddhism ascribes to it; but it is given as an impregnable basis, sad but true, on which the whole building of the system reposes.

Secondly, the cause of suffering, which the Buddha attributes to the passions, to sinful lusts.

The third Noble Truth, a fitting consolation for the sad reality of the two first, is that sorrow will cease by Nirvana, the supreme goal and reward of all man’s efforts.

Finally, the fourth and last Truth, which forms the principal belief of Buddhism, the path leading to the cessation of sorrow, the method of salvation, the way that leads to Nirvana.

The way or method of salvation is called ‘The Noble Eightfold Path.’  It is summed up in eight principles or parts, which are so many conditions that man must fulfill in order to ensure his eternal deliverance.