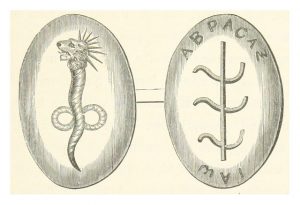 Lewis Spence, in The Encyclopedia of the Occult, defines Gnosticism as “an admixture of Indian, Egyptian, Babylonian, and Christian creeds, astrology and magic, with much of the Jewish Kabbalah also.”

The term “Gnostic” is derived from the Greek gnosis, which is knowledge or, as a verb, to know.  Basically, Gnostics believe that one must know God, must actually experience God, rather than simply theorize about God, or good, or evil.  To use a simple analogy, a Gnostic might say that the difference between experiencing God directly, as opposed to learning about God through religious teachings, is similar to the difference between actually sitting in one’s living room experiencing an earthquake, as opposed to sitting in one’s living room reading about an earthquake.

Gnosticism lends itself to confusion (and sometimes unbridled speculation) partly owing to its antiquity, partly to the secret nature of its teachings, and partly because, as a religion, it never became an “organized” religion in the sense that other belief systems did.  Add to this the fact that the early Christian Church in particular attempted to destroy any record of Gnostic thought or belief, and carried on this work for centuries, and one sees how difficult it is to arrive at a factual history of Gnosticism.

We can, with some certainty, say this: Gnostic thought preceded and influenced Christian and Islamic teachings, and existed in various forms after the establishment of these two religions.  Gnosticism was, at the time they existed, virtually synonymous with Mystery Religions, particularly Mithraism.  Eleusinian and Cabiric Mystery Religion rites were practiced by Gnostics to a late date.

Since the discovery of Gnostic texts at Nag Hammadi in 1945, we have been left with the question of whether or not Jesus himself was a Gnostic.  Setting aside that question for a moment – and, indeed, a far more worthwhile and far-reaching question would be whether Jesus’s cousin, John the Baptist, was a Gnostic – we can name some Christian Gnostic sects: Manicheans (founded by Manes, or Mani, said to be a competent astrologer), Paulicians, Cathari, Albigensians, Lollards, and Carbonari.  All Christian Gnostics were persecuted as heretics by the Catholic Church, and the “Albigensian Crusade” is a bloody example of how far these persecutions were sometimes taken.

Gnostics were also persecuted by Muslims, notably in Persia.  According to Lewis Spence, some gnostics converted to Islam and became Dervishes, i.e., Sufis.  This explains why Idries Shah, in writing about the history of the Sufis, states that a Sufi is not necessarily Islamic in his beliefs, and that Sufism existed before either Islam or Christianity.  This also explains, though hardly pardons, the modern-day persecution of Sufis by some misguided fundamentalist Muslims.

Judaic Gnosticism is probably best typified by the Kabbalah.  Gershom Scholem, referring to  kabbalistic rituals written by Isaac Luria, notes that “They read like the hymns of a mystery religion.”