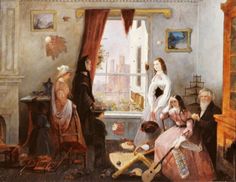 [This is taken from Thomas Clarkson's A Portraiture of Quakerism.]

The Quakers are remarkably careful, both in their conversation and their writings, on religious subjects, as to the terms which they use. They express scriptural images or ideas, as much as may be, by scriptural terms. By means of this particular caution, they avoid much of the perplexity and many of the difficulties which arise to others, and escape the theological disputes which disturb the rest of the Christian world.

The Quakers scarcely ever utter the words “original sin,” because they never find them in use in the sacred writings.

The scriptures are usually denominated by Christians “the word of God.” Though the Quakers believe them to have been given by divine inspiration, yet they reject this term. They apprehend that Christ is the word of God. They cannot therefore consistently give to the scriptures, however they reverence them, that name which St. John the Evangelist gives exclusively to the Son of God.

Neither do they often make use of the word “Trinity.” This expression they can no where find in the sacred writings. This to them is a sufficient warrant for rejecting it. They consider it as a term of mere human invention, and of too late a date to claim a place among the expressions of primitive Christianity. For they find it neither in Justin Martyr, nor in Irenaeus, nor in Tertullian, nor in Origen, nor in the Fathers of the three first centuries of the church.

And as they seldom use the term, so they seldom or never try, when it offers itself to them, either in conversation or in books, to fathom its meaning. They judge that a curious inquiry into such high and speculative things, though ever so great truths in themselves, tends little to Godliness, and less to peace; and that their principal concern is with that only which is clearly revealed, and which leads practically to holiness of life.

Consistently with this judgment, we find but little said respecting the Trinity by the Quaker writers.

It is remarkable that Barclay in the course of his apology, takes no notice of this subject.

William Penn seems to have satisfied himself with refuting what he considered to be a gross notion, namely, that of three persons in the Trinity. For after having shown what the Trinity was not, he no where attempts to explain what he conceived it to be. He says only, that he acknowledges a Father, a Word, and a Holy Spirit, according to the scriptures, but not according to the notions of men; and that these Three are truly and properly One, of one nature as well as will.

John Crook, another ancient writer of this society, in speaking of the Trinity, says, that the Quakers “acknowledge one God, the Father of Jesus Christ, witnessed within man only by the spirit of truth; and these three are one, and agree in one; and he that honors the Father, honors the Son that proceeds from him; and he that denies the Spirit, denies both the Father and the Son.” But nothing farther can be obtained from this author on this subject.

Henry Tuke, a modern writer among the Quakers, and who published an account of the principles of the society only last year, says also little upon the point before us. “This belief, says he, in the Divinity of the Father, the Son, and the Holy Spirit, induced some of the teachers in the Christian church, about three hundred years after Christ, to form a doctrine, to which they gave the name of Trinity; but, in our writings we seldom make use of this term, thinking it best, on such a subject, to keep to scriptural expressions, and to avoid those disputes which have since perplexed the Christian world, and led into speculations beyond the power of human abilities to decide. If we consider that we ourselves are composed of a union of body, soul, and spirit, and yet cannot determine how even these are united; how much less may we expect perfect clearness on a subject, so far above our finite comprehension, as that of the Divine Nature?”

The Quakers believe, that Jesus Christ was man, because he took flesh, and inhabited the body prepared for him, and was subject to human infirmities; but they believe also in his Divinity, because he was the word.

They believe also in the doctrine of the resurrection of the dead, as connected with the Christian religion. In explaining our belief of this doctrine, says Henry Tuke, we refer to the fifteenth chapter of the first epistle to the Corinthians. In this chapter is clearly laid down the resurrection of a body, though not of the same body that dies.  “There are celestial bodies, and there are bodies terrestrial; but the glory of the celestial is one, and the glory of the terrestrial is another. So also is the resurrection of the dead: It is sown a natural body, it is raised a spiritual body: there is a natural body, and there is a spiritual body. Now this I say, brethren, that flesh and blood cannot inherit the kingdom of God; neither doth corruption inherit incorruption.” Here we rest our belief in this mystery, without desiring to pry into it beyond what is revealed to us; remembering “that secret things belong unto the Lord our God; but those things which are revealed, belong unto us and to our children.”

The Quakers make but little difference, and not such as many other Christians do, between sanctification and justification. “Faith and works, says Richard Claridge, are both concerned in our complete justification.”—“Whosoever is justified, he is also in measure sanctified; and as far as he is sanctified, so far is he justified, and no farther. But the justification I now speak of, is the making of us just or righteous by the continual help, work, and operation of the Holy Spirit.”—“And as we wait for the continual help and assistance of his Holy Spirit, and come to witness the effectual working of the same in ourselves, so we shall experimentally find, that our justification is proportional to our sanctification; for as our sanctification goes forward, which is always commensurate to our faithful obedience to the manifestation, influence, and assistance, of the grace, light, and spirit of Christ, so shall we also feel and perceive the progress of our justification.”

The ideas of the Quakers, as to justification itself, cannot be better explained than in the words of Henry Tuke before quoted: So far as remissions of sins, and a capacity to receive salvation, are parts of justification, we attribute it to the sacrifice of Christ; “In whom we have redemption through his blood, the forgiveness of sins, according to the riches of his grace.” But when we consider justification as a state of divine favor and acceptance, we ascribe it, not simply either to faith or works, but to the sanctifying operation of the spirit of Christ, from which living faith and acceptable works alone proceed; and by which we may come to know, that “the spirit itself beareth witness with our spirits, that we are the children of God.”

In attributing our justification, through the grace of God in Christ Jesus, to the operation of the Holy Spirit, which sanctifies the heart and produces the work of regeneration, we are supported by the testimony of the Apostle Paul, who says, “Not by works of righteousness which we have done, but of his mercy he saved us, by the washing of regeneration, and renewing of the Holy Ghost.” Again—“But ye are washed, but ye are sanctified, but ye are justified, in the name of the Lord Jesus, and by the spirit of our God.”

“By this view of the doctrine of justification, we conceive the apparently different sentiments of the Apostles Paul and James are reconciled. Neither of them say that faith alone, or works alone, are the cause of our being justified; but as one of them asserts the necessity of faith, and the other of works, for effecting this great object, a clear and convincing proof is afforded, that both contribute to our justification; and that faith without works, and works without faith, are equally dead.”