A Portraiture of Quakerism

Taken from a View of the Education and Discipline, Social Manners, Civil and Political Economy,
Religious Principles and Character, of the Society of Friends 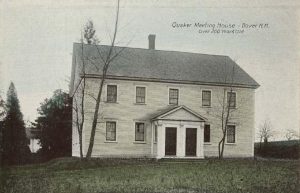 Amusements distinguishable into useful and hurtful — the latter specified and forbidden.

SECT. I.– Games of chance forbidden — history of the origin of some of these.

SECT. II.– Forbidden as below the dignity of the intellect of man, and of his Christian character.

SECT. III.– As producing an excitement of the passions, unfavorable to religious impressions — historical anecdotes of this excitement.

SECT. IV.– As tending to produce, by the introduction of habits of gaming, an alteration in the moral character.

SECT. I.– Music forbidden — instrumental innocent in itself, but greatly abused — the use of it almost inseparable from its abuse at the present day.

SECT. II.– Quakers cannot learn instrumental on the usual motives of the world — nor consider it as a source of moral improvement, or of solid comfort to the mind—but are fearful that, if indulged in, it would interfere with the Christian duty of religious retirement.

SECT III.– Quakers cannot learn vocal, because, on account of its articulative powers, it is capable of becoming detrimental to morals — its tendency to this, as discoverable by an analysis of different classes of songs.

SECT IV.– The preceding the arguments of the early Quaker — but the new state of music has produced others — these explained.

SECT V.– An objection stated to the different arguments of the Quakers on this subject — their reply.

SECT I.– The Theatre forbidden — short history of its origin — and of its state and progress.

SECT II.– Manner of the drama objected to by the Quakers — as it personates the characters of others — and it professes to reform vice.

SECT III.– Contents of the drama objected to — as they hold our false sentiments — and weaken the sinews of morality.

SECT IV.– Theater considered by the Quakers to be injurious to the happiness of man, as it disqualifies him for the pleasure of religion.

SECT V.– To be injurious to the happiness of man, as it disqualifies him for domestic enjoyments.

SECT VI.–Opinions of the early Christians on this subject.

SECT. I.– Dancing forbidden — light in which this subject has been viewed both by the ancients and the moderns — Quakers principally object to it, where it is connected with public assemblies — they conceive it productive, in this case, of a frivolous levity, and of an excitement of many of the evil passions.

SECT. II– These arguments of the Quakers, on dancing, examined in three supposed cases put to a moral philosopher.

SECT. III.– These arguments further elucidated by a display of the Ballroom.

Novels forbidden — considered by the Quakers as producing an affectation of knowledge — a romantic spirit — and a perverted morality.

SECT. I– Diversions of the field forbidden — general thoughtlessness upon this subject — sentiments of some of our best poets — law of the Quakers concerning it.

SECT. II.– Consistency of this law examined by the morality, which is inculcated by the Old Testament.

SECT. III.– Examined by the morality of the New — these employments, if resorted to as diversions, pronounced, in both cases, to be a breach of a moral law.

Objections to the preceding system, which includes these different prohibitions, as a system of moral education.

SECT. I.– Reply of the Quakers to these objections.

SECT. II.– Further reply of the Quakers on the same subject.

SECT. I.– Outlines of the discipline of the Quakers.

SECT. II.– Manner of the administration of this discipline.

SECT. III.– Charges usually brought against the administration of it — observations in answer in these charges.

SECT. IV.– The principles of this discipline applicable to the discipline of larger societies, or to the criminal codes of states — beautiful example in Pennsylvania.

Monthly court or meeting of the Quakers for the purposes of their discipline — nature and manner of the business transacted there.

Quarterly court or meeting for the same purposes — nature and manner of the business there.

Annual court or meeting for the same purposes — nature and manner of the business there — striking peculiarities in this manner — character of this discipline or government.

Excommunication or disowning — nature of disowning as a punishment.

SECT. I.–Dress — extravagance of the dress of the fifteenth and sixteenth centuries — plain manner in which the grave and religious were then habited — the Quakers sprang out of these.

SECT. II.– Quakers carried with them their plain dresses into their new society — extravagance of the world continuing, they defined the objects of dress as a Christian people — at length incorporated it into their discipline — hence their present dress is only a less deviation from that of their ancestors, than that of other people.

SECT. III.– Objections of the world to the Quaker dress — those examined — a comparison between the language of Quakerism and of Christianity on this subject — opinion of the early Christians upon it.

Furniture—the Quakers use plain furniture — reasons for their singularities in this respect.

SECT. I.– Language — Quakers have altered the common language — substitution of Thou for You — reasons for this change — opinions of many learned men concerning it.

SECT. II.– Various other alterations made — as in titled of address — and of honor — reasons for these changes.

SECT. III.– Another alteration—as in the names of the days and the months — reasons for this change — various new phrases also introduced.

SECT. IV.– Objections by the world against the alteration of Thou for You.

SECT. V.– Against that of titles of address and honor.

SECT. VI.– Against that of the names of the days and months.

SECT. VIII.– Advantages and disadvantages of these alterations by the Quaker language.

Address — common personal gestures or worldly ceremonies of address forbidden — no exception in favor of royalty — reasons against the disuse of these.

Manners and conversation — hospitality and freedom in Quakers’ houses — their conversation more limited than that of others — subjects of conversation examined in our towns — and in the metropolis — extraordinary circumstance that takes place occasionally in the company of the Quakers.

Customs before meals — ancients made an oblation to Vesta — moderns have substituted grace — account of a Quaker-grace.

Customs at and after meals — Quakers never drink healths or toasts — various reasons for their disuse of these customs — and seldom allow women to retire  after dinner and leave the men drinking — Quakers a sober people.