Religion of the Celts 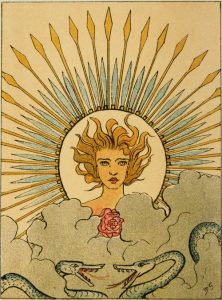 The scientific study of ancient Celtic religion is a thing of recent growth. As a result of the paucity of materials for such a study, earlier writers indulged in the wildest speculative flights and connected the religion with the distant East, or saw in it the remains of a monotheistic faith or a series of esoteric doctrines veiled under polytheistic cults. With the works of MM. Gaidoz, Bertrand, and D’Arbois de Jubainville in France, as well as by the publication of Irish texts by such scholars as Drs. Windisch and Stokes, a new era may be said to have dawned, and a flood of light was poured upon the scanty remains of Celtic religion. In this country the place of honor among students of that religion belongs to Sir John Rhys, whose Hibbert Lectures On the Origin and Growth of Religion as illustrated by Celtic Heathendom (1886) was an epoch-making work. Every student of the subject since that time feels the immense debt which he owes to the indefatigable researches and the brilliant suggestions of Sir John Rhys, and I would be ungrateful if I did not record my indebtedness to him. In his Hibbert Lectures, and in his later masterly work on The Arthurian Legend, however, he took the standpoint of the “mythological” school, and tended to see in the old stories myths of the sun and dawn and the darkness, and in the divinities sun-gods and dawn-goddesses and a host of dark personages of supernatural character. The present writer, studying the subject rather from an anthropological point of view and in the light of modern folk survivals, has found himself in disagreement with Sir John Rhys on more than one occasion. But he is convinced that Sir John would be the last person to resent this, and that, in spite of his mythological interpretations, his Hibbert Lectures must remain as a source of inspiration to all Celtic students. More recently the studies of M. Salomon Reinach and of M. Dottin, and the valuable little book on Celtic Religion, by Professor Anwyl, have broken fresh ground.

In this book I have made use of all the available sources, and have endeavored to study the subject from the comparative point of view and in the light of the anthropological method. I have also interpreted the earlier cults by means of recent folk-survivals over the Celtic area wherever it has seemed legitimate to do so. The results are summarized in the introductory chapter of the work, and students of religion, and especially of Celtic religion, must judge how far they form a true interpretation of the earlier faith of our Celtic forefathers, much of which resembles primitive religion and folk-belief everywhere.

Unfortunately no Celt left an account of his own religion, and we are left to our own interpretations, more or less valid, of the existing materials, and to the light shed on them by the comparative study of religions. As this book was written during a long residence in the Isle of Skye, where the old language of the people still survives, and where the genius loci speaks everywhere of things remote and strange, it may have been easier to attempt to realize the ancient religion there than in a busier or more prosaic place. Yet at every point I have felt how much would have been gained could an old Celt or Druid have revisited his former haunts, and permitted me to question him on a hundred matters which must remain obscure. But this, alas, might not be!

I have to thank Miss Turner and Miss Annie Gilchrist for valuable help rendered in the work of research, and the London Library for obtaining for me several works not already in its possession. Its stores are an invaluable aid to all students working at a distance from libraries.

III. THE GODS OF GAUL AND THE CONTINENTAL CELTS

XXII. THE STATE OF THE DEAD