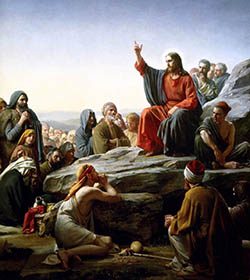 The issue that I am concerned with in this essay is the direction and future viability of Christianity. To look at such a future, it may be helpful to start by taking a look backward, specifically to 1890, and a sermon delivered by Joseph Parker at the City Temple in London, entitled, “Why Do We Inquire About Jesus Christ?” Parker covers a good bit of ground, but the part of the sermon we are concerned with here reads as follows:

There is a possibility of destroying Christ, under the guise of worshipping him, and there is a further possibility of destroying Christ more or less unconsciously, by giving false notions of him, by making him a class-redeemer, by setting him apart for sectarian uses, by attaching to him badges and labels, scarves, and memorials, that make him belong to one corner only, by narrowing his words down into denominational shibboleths – by a thousand such ways we destroy Christ’s influence in the world.

Over a century has passed since these words were spoken to church-goers – moral folk, we must presume – in London.  How sad it is that there is no Joseph Parker now alive in modern-day America, with the courage to proclaim the same message.  For certainly, never has the risk of “destroying Christ, under the guise of worshipping him” been greater than it is at this time, and in this place.

If a man, who knew nothing about the life or teachings of Jesus Christ, were suddenly to find himself in the United States of today, what impression would he form of this religious figure?  That he would learn of Jesus Christ would be inevitable.  Driving a few minutes in any direction in any town or city, he would encounter one, and probably many, “Christian” churches.  If he turned on the radio, he would hear the voice of “Christian” radio.  If he turned on the television, he would see “Christian” programming.

And what would all these “Christian” sources teach our unschooled man about Jesus Christ?  Would he hear of a figure who encouraged giving to the poor, feeding the hungry, comforting the sick?  Would he encounter examples of “the meek,” who are presumably blessed?  Would he see examples of followers willing to “turn the other cheek?”  Would he meet again and again with the message that one ought to “love thy neighbor as thyself?”

Sadly, he would not.  He would, instead, be bombarded with images of the most sectarian Jesus Christ imaginable, a caricatured bumper-sticker Jesus who presumably came to earth two thousand years ago with the express purpose of ensuring that all Americans would one day vote against gay rights and certain medical practices.  He would learn of a Jesus whose sole commandment must have been, “Devote your life to the criticizing of others.”  Parker warned of narrowing the words of Christ “down into denominational shibboleths,” but a vast number of “Christian” Americans have gone well past that, not only narrowing his words but twisting and contorting them out of all recognition in order to prove their own fanatical viewpoints.

It is also a fact that these American “Christians” donate millions of dollars to political campaigns each year in order to elect politicians to fight for their particular conception of “moral issues.”  Could not these millions of dollars be better used to provide shelter for the homeless, food for the hungry, warm clothing for the needy?  Is not America a country where homeless persons still freeze to death each year on winter streets, and where people without adequate health care insurance continue to suffer needlessly and die prematurely?

The United States is a country where every third car seems to sport a bumper-sticker asking “What Would Jesus Do?”  My question to the drivers of those cars – to all Americans, for that matter, who call themselves followers of Christ – is, “What, indeed?”