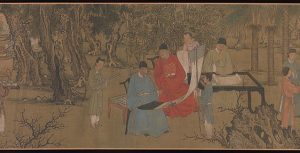 [This is taken from Herbert A. Giles’ The Religions of Ancient China, first published in 1920.]

The philosophy associated with the name of Lao Tzu, who lived nobody knows when,—probably about B.C. 600—which is popularly known as Taoism, from Tao, the omnipresent, omnipotent, and unthinkable principle on which it is based, operated with Confucianism, though in an opposite direction, in dislimning the old faith while putting nothing satisfactory in its place. Confucianism, with its shadowy monotheistic background, was at any rate a practical system for everyday use, and it may be said to contain all the great ethical truths to be found in the teachings of Christ. Lao Tzu harped upon a doctrine of Inaction, by virtue of which all things were to be accomplished,—a perpetual accommodation of self to one’s surroundings, with the minimum of effort, all progress being spontaneous and in the line of least resistance. Such a system was naturally far better fitted for the study, where in fact it has always remained, than for use in ordinary life.

In one of the few genuine utterances of Lao Tzu which have survived the wreck of time, we find an allusion to a spiritual world. Unfortunately, it is impossible to say exactly what the passage means. According to Han Fei (died B.C. 233), who wrote several chapters to elucidate the sayings of Lao Tzu, the following is the correct interpretation:—

“Govern a great nation as you would cook a small fish (i.e. do not overdo it).

“If the empire is governed according to Tao, evil spirits will not be worshipped as good ones.

“If evil spirits are not worshipped as good ones, good ones will do no injury. Neither will the Sages injure the people. Each will not injure the other. And if neither injures the other, then there will be mutual profit.”

The latter portion is explained by another commentator as follows:—

Adumbrations of Heraclitus.—In the hands of Lao Tzu’s more immediate followers, Tao became the Absolute, the First Cause, and finally One in whose obliterating unity all seemingly opposed conditions of time and space were indistinguishably blended. This One, the source of human life, was placed beyond the limits of our visible universe; and in order for human life to return thither at death and to enjoy immortality, it was only necessary to refine away corporeal grossness according to the doctrines of Lao Tzu. Later on, this One came to be regarded as a fixed point of dazzling luminosity, in remote ether, around which circled for ever and ever, in the supremest glory of motion, the souls of those who had successfully passed through the ordeal of life, and who had left the slough of humanity behind them.

The final state is best described by a poet of the ninth century A.D.:—

Like a whirling water-wheel,
Like rolling pearls,—
Yet how are these worthy to be named?
They are but illustrations for fools.
There is the mighty axis of Earth,
The never-resting pole of Heaven;
Let us grasp their clue,
And with them be blended in One,
Beyond the bounds of thought,
Circling for ever in the great Void,
An orbit of a thousand years,—
Yes, this is the key to my theme.

Debased Taoism.—This view naturally suggested the prolongation of earthly life by artificial means; hence the search for an elixir, carried on through many centuries by degenerate disciples of Taoism. But here we must pass on to consider some of the speculations on God, life, death, and immortality, indulged in by Taoist philosophers and others, who were not fettered, as the Confucianists were, by traditional reticence on the subject of spirits and an unseen universe.

Spirits must exist.—Mo Tzu, a philosopher of the fourth and fifth centuries B.C., was arguing one day for the existence of spirits with a disbelieving opponent. “All you have to do,” he said, “is to go into any village and make enquiries. From of old until now the people have constantly seen and heard spiritual beings; how then can you say they do not exist? If they had never seen nor heard them, could people say that they existed?” “Of course,” replied the disbeliever, “many people have seen and heard spirits; but is there any instance of a properly verified appearance?” Mo Tzu then told a long story of how King Hsuan, B.C. 827-781, unjustly put to death a Minister, and how the latter had said to the King, “If there is no consciousness after death, this matter will be at an end; but if there is, then within three years you will hear from me.” Three years later, at a grand durbar, the Minister descended from heaven on a white horse, and shot the King dead before the eyes of all.

Traces of Mysticism.—Chuang Tzu, the famous philosopher of the third and fourth centuries B.C., and exponent of the Tao of Lao Tzu, has the following allusions to God, of course as seen through Taoist glasses:—

“God is a principle which exists by virtue of its own intrinsicality, and operates spontaneously without self-manifestation.

“The ultimate end is God. He is manifested in the laws of nature. He is the hidden spring. At the beginning of all things, He was.”

Taoism, however, does not seem to have succeeded altogether, any more than Confucianism, in altogether estranging the Chinese people from their traditions of a God, more or less personal, whose power was the real determining factor in human events. The great general Hsiang Yu, B.C. 233-202, said to his charioteer at the battle which proved fatal to his fortunes, “I have fought no fewer than seventy fights, and have gained dominion over the empire. That I am now brought to this pass is because God has deserted me.”