Resemblance of the Zen Monk to the Samurai 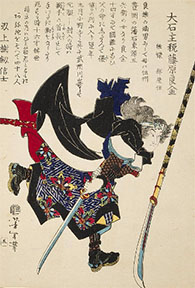 Let us point out in brief the similarities between Zen and Japanese chivalry.  First, both the Samurai and the Zen monk have to undergo a strict discipline and endure privation without complaint.  Even such a prominent teacher as Ei-sai, for example, lived contentedly in such needy circumstances that on one occasion he and his disciples had nothing to eat for several days.  Fortunately, they were requested by a believer to recite the Scriptures, and presented with two rolls of silk.  The hungry young monks, whose mouths watered already at the expectation of a long-looked-for dinner, were disappointed when that silk was given to a poor man, who called on Ei-sai to obtain some help.  Fast continued for a whole week, when another poor follow came in and asked Ei-sai to give something.  At this time, having nothing to show his substantial mark of sympathy towards the poor, Ei-sai tore off the gilt glory of the image of Buddha Bhecajya and gave it.  The young monks, bitten both by hunger and by anger at this outrageous act to the object of worship, questioned Ei-sai by way of reproach: “Is it, sir, right for us Buddhists to demolish the image of a Buddha?”  “Well,” replied Ei-sai promptly, “Buddha would give even his own life for the sake of suffering people.  How could he be reluctant to give his halo?”  This anecdote clearly shows us self-sacrifice is of first importance in the Zen discipline.

Secondly, the so-called honest poverty is a characteristic of both the Zen monk and the Samurai.  To get rich by an ignoble means is against the rules of Japanese chivalry or Bushido.  The Samurai would rather starve than to live by some expedient unworthy of his dignity.  There are many instances, in the Japanese history, of Samurais who were really starved to death in spite of their having a hundred pieces of gold carefully preserved to meet the expenses at the time of an emergency; hence the proverb: “The falcon would not feed on the ear of corn, even if he should starve.”  Similarly, we know of no case of Zen monks, ancient and modern, who got rich by any ignoble means.  They would rather face poverty with gladness of heart.  Fu-gai, one of the most distinguished Zen masters just before the Restoration, supported many student monks in his monastery.  They were often too numerous to be supported by his scant means.  This troubled his disciple much whose duty it was to look after the food-supply, as there was no other means to meet the increased demand than to supply with worse stuff.  Accordingly, one day the disciple advised Fu-gai not to admit new students any more into the monastery.

Then the master, making no reply, lolled out his tongue and said: “Now look into my mouth, and tell if there be any tongue in it.”  The perplexed disciple answered affirmatively.  “Then don’t bother yourself about it.  If there be any tongue, I can taste any sort of food.”  Honest poverty may, without exaggeration, be called one of the characteristics of the Samurais and of the Zen monks; hence a proverb: “The Zen monk has no money, moneyed Monto knows nothing.”

Thirdly, both the Zen monk and the Samurai were distinguished by their manliness and dignity in manner, sometimes amounting to rudeness.  This is due partly to the hard discipline that they underwent, and partly to the mode of instruction.  The following story, translated by Mr. D. Suzuki, a friend of mine, may well exemplify our statement:

“When Rin-zai was assiduously applying himself to Zen discipline under Obak (Huang Po in Chinese, who died 850), the head monk recognized his genius.  One day the monk asked him how long he had been in the monastery, to which Rin-zai replied: ‘Three years.’ The elder said: ‘Have you ever approached the master and asked his instruction in Buddhism?’  Rin-zai said: ‘I have never done this, for I did not know what to ask.’  ‘Why, you might go to the master and ask him what is the essence of Buddhism?’

“Rin-zai, according to this advice, approached Obak and repeated the question, but before he finished the master gave him a slap.

“When Rin-zai came back, the elder asked how the interview went.  Said Rin-zai: ‘Before I could finish my question the master slapped me, but I fail to grasp its meaning.’  The elder said: ‘You go to him again and ask the same question.’  When he did so, he received the same response from the master.  But Rin-zai was urged again to try it for the third time, but the outcome did not improve.

“At last he went to the elder, and said ‘In obedience to your kind suggestion, I have repeated my question three times, and been slapped three times.  I deeply regret that, owing to my stupidity, I am unable to comprehend the hidden meaning of all this.  I shall leave this place and go somewhere else.’  Said the elder: ‘If you wish to depart, do not fail to go and see the master to say him farewell.’

“Immediately after this the elder saw the master, and said: ‘That young novice, who asked about Buddhism three times, is a remarkable fellow.  When he comes to take leave of you, be so gracious as to direct him properly.  After a hard training, he will prove to be a great master, and, like a huge tree, he will give a refreshing shelter to the world.’

“When Rin-zai came to see the master, the latter advised him not to go anywhere else, but to Dai-gu (Tai-yu) of Kaoan, for he would be able to instruct him in the faith.

“Rin-zai went to Dai-gu, who asked him whence he came.  Being informed that he was from Obak, Dai-gu further inquired what instruction he had under the master.  Rin-zai answered: ‘I asked him three times about the essence of Buddhism, and he slapped me three times.  But I am yet unable to see whether I had any fault or not.’ Dai-gu said: ‘Obak was tender-hearted even as a dotard, and you are not warranted at all to come over here and ask me whether anything was faulty with you.’

“Being thus reprimanded, the signification of the whole affair suddenly dawned upon the mind of Rin-zai, and he exclaimed: ‘There is not much, after all, in the Buddhism of Obak.’  Whereupon Dai-gu took hold of him, and said: ‘This ghostly good-for-nothing creature!  A few minutes ago you came to me and complainingly asked what was wrong with you, and now boldly declare that there is not much in the Buddhism of Obak.  What is the reason of all this?  Speak out quick!  speak out quick!’  In response to this, Rin-zai softly struck three times his fist at the ribs of Dai-gu.  The latter then released him, saying: ‘Your teacher is Obak, and I will have nothing to do with you.’

“Rin-zai took leave of Dai-gu and came back to Obak, who, on seeing him come, exclaimed: ‘Foolish fellow! what does it avail you to come and go all the time like this?’  Rin-zai said: ‘It is all due to your doting kindness.’

“When, after the usual salutation, Rin-zai stood by the side of Obak, the latter asked him whence he had come this time.  Rin-zai answered:

“In obedience to your kind instruction, I was with Dai-gu. Thence am I come.’

And he related, being asked for further information, all that had happened there.

“Obak said: ‘As soon as that fellow shows himself up here, I shall have to give him a good thrashing.’  ‘You need not wait for him to come; have it right this moment,’ was the reply; and with this Rin-zai gave his master a slap on the back.

“Obak said: ‘How dares this lunatic come into my presence and play with a tiger’s whiskers?’  Rin-zai then burst out into a loud outcry, and Obak said: ‘Attendant, come and carry this lunatic away to his cell.’”

Fourthly, our Samurai encountered death, as is well known, with unflinching courage.  He would never turn back from, but fight until his last with his enemy.  To be called a coward was for him the dishonor worse than death itself.  An incident about Tsu Yuen (So-gen), who came over to Japan in 1280, being invited by Toki-mune (Ho-jo), the Regent General, well illustrates how much Zen monks resembled our Samurais.  The event happened when he was in China, where the invading army of Yuen spread terror all over the country.  Some of the barbarians, who crossed the border of the State of Wan, broke into the monastery of Tsu Yuen, and threatened to behead him.  Then calmly sitting down, ready to meet his fate, he composed the following verses:

“The heaven and earth afford me no shelter at all;
I’m glad, unreal are body and soul.
Welcome thy weapon, O warrior of Yuen!
Thy trusty steel, That flashes lightning, cuts the wind of Spring, I feel.”

This reminds us of Sang Chao (So-jo), who, on the verge of death by the vagabond’s sword, expressed his feelings in the follow lines:

“In body there exists no soul.
The mind is not real at all.
Now try on me thy flashing steel,
As if it cuts the wind of Spring, I feel.”

The barbarians, moved by this calm resolution and dignified air of Tsu Yuen, rightly supposed him to be no ordinary personage, and left the monastery, doing no harm to him.