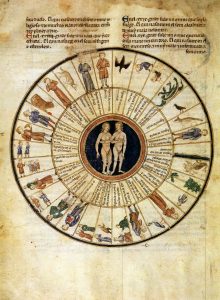 [This is taken from Thomas H. Burgoyne’s The Science of the Soul and Stars, 1903.]

To the ordinary astrologer the Zodiac is simply a band of space, eighteen degrees wide, in the heavens, the center of which marks out the pathway of the Sun during the space of one year of 365 days, etc.

The twelve signs are to him simply thirty degrees of the space (12 times 30 equal 360), bearing the names of the constellations which once occupied them. Nay, he, as a rule, still imagines in some sense that the signs (constellations) are still there, and that the power and potency of the twelve signs is derived from the stars which occupy the Zodiacal band of the skies.

But this is not so, as any ordinary astronomer well knows. This single fact, i.e., the gradual shifting of the constellations, the DISPLACEMENT, let us say, of the starry influx from one sign to another without any ALLOWANCE being made in the astrologer’s rules for any such change, has been one of the greatest obstructions to the popular spread of the art among EDUCATED MINDS. Argues the scientist: The “fiery influence of Aries,” if depending upon the stars of that constellation, ought now to be shedding forth their caloric from the sign Pisces, and Aries ought to be lumbering along with the earthy Taurus nature. So, also, the lords of these signs ought to be changed, but that they are not can be proved by the fact that our earliest records of that dim, historic past show, equally as well as your latest “text-book,” that Mars is the lord of Aries–a fiery planet in a fiery sign; but astrologers still say that Pisces is watery and Aries fiery, WHICH IS NOT THE CASE, IF THE STARS HAVE ANY INFLUENCE AT ALL. It is not necessary,” say these logical thinkers, “to learn your abstruse science if we can demonstrate that the very basis upon which your conclusions rest is in every sense fundamentally false.” The scientific facts of the case are as follows: The influence of the twelve signs, as described by astrologers, is a delusion, because in all ages they are reported the same; whereas WE KNOW that every 2,160 years each sign retrogrades to the extent of thirty degrees, and, as your art does not make allowance for this, it is false. For, if the influence of the twelve signs does not emanate from the stars occupying the space of those signs, it must emanate from nothing–a doctrine well suited, no doubt, to musty old sages of your superstitious Chaldea, but quite out of court in our progressive and scientific age.

So far, so good. And so the world rolls along its bright pathway in the heavens, little heeding the logical conclusions of an exact science. But to an initiate of those inner principles of our planet’s constitution all these mental conflicts have a meaning and a purpose within Nature’s divine economy; for it is neither wise nor expedient that the masses, with popular science in the lead, should grasp the truths which Mother Nature reserves ALONE for her own devoted priests.

The shining Zodiac, with its myriad constellations and its perfect galaxy of starry systems, derives its subtle influence, as impressed astrologically upon the human constitution, from the solar center of our solar system, NOT FROM THE STARS which occupy the twelve mansions of space. Aries, the fiery, and PISCES, the watery, ARE ALWAYS THERE, and, instead of its being an argument against astrology, it is one of its grandest truths that, in all ages and in all times, Aries, the first sign of the Zodiac has been found EVER THE SAME, equally as well as Pisces the last.

In order to convey our meaning, let us digress for a moment and bring forth a fitting illustration. The condition of our atmosphere and the surrounding objects–vegetation, etc.–have a peculiar condition and a magnetism wholly their own when surveyed exactly at sunrise. There is a freshness and peculiar sense of buoyancy not visible at any other time. If this state could be registered by any instrument and compared with any other set periods during the day, it would offer a remarkable contrast. Two hours later there is a very different influence, and at noon there is a wonderful contrast. The same may be said of sunset, and again at midnight; and, lastly, note the difference two hours before dawn. This is the coolest period of the whole twenty-four hours. These are facts, and yet our hearts are all beating to the same life-flow, and the Earth is no farther away from the parent Sun; and yet it is the angle at which we, THE INHABITANTS, receive this Sun’s light that makes all the difference between dawn and sunset, noon and midnight.

When to these facts it is further added that it is sunrise, noon, sunset and midnight at the same instant, all the time, to some of the various, different portions of the globe, it demonstrates most conclusively that the Earth itself is enveloped, so to say, in a complete circle of conditions very similar to the twelve signs of the celestial Zodiac.

If we apply the foregoing illustration to the twelve signs of the Zodiac, we shall see a perfect analogy. We shall find that when the Sun reaches the celestial equator, so that it is equal day and equal night on the Earth, that he is on the line of the celestial horizon; it is cosmic sunrise. Hence Aries, the fiery Azoth, begins his active influx, and extends for thirty degrees, equal to two hours of the natural day.

It is the fiery red streams of awakening life that we all manifest at sunrise; then comes a change of magnetic polarity after the first fiery flush of cosmic life; the gleeful chattering of the birds and the cackling of the poultry. A reaction is noted; all things before active become restful and quiet.

This corresponds with the sign Taurus. It is the solar influx, thirty degrees removed from his point of equilibrium toward the North. As this sign represents the powers of absorption, we see that at this period vegetable and animal life is quietly absorbing, for its own use, the fiery streams of solar life.

Again we view the activity of solar influx from a different angle and change of polarity, and all things become active, It is executive force. This corresponds to the sign Gemini. It is the solar influx, sixty degrees removed from his point of equilibrium. Then comes another change of magnetic polarity. It is rest from labor; it is noon. This corresponds to Cancer. The analogy is perfect. It is the solar influx, ninety degrees removed from his point of equilibrium toward the North, and the highest point in the arc of his apparent journey and of cosmic life. It is the equilibrium of life forces.

Again the fiery influx begins its activity, and, as the hottest part of the day is about two hours after noon, or middle of the day, so is solar influx most potent at this point in the Zodiac.

This corresponds to the sign Leo. It is the solar influx, removed 120 degrees from his point of equilibrium and thirty degrees toward the South. And so on month after month, until the last one, Pisces, which well corresponds to the watery skies of February and the lifeless period two hours before dawn of a new day upon the Earth, a new year to man and a new cycle in the starry heavens. The Zodiac, then, as it applies to the human constitution and the science of astrology, has its foundation in the Sun, the center and source of life to the planet; and the twelve signs are the twelve great spaces of our Earth’s annual orbit about her solar parent, each one typical of its month, and each month typical of its corresponding action upon our Earthly conditions.

When we reflect upon the inner laws of this action and interaction, we come nearer and nearer to the one great occult fact, viz.: THE DIVINE ONENESS OF LIFE.

We find a perfect analogy between the destiny, the life, and expression of life on the Earth, and the life and material destiny of embodied man. He, too, has his sunrise, the beginning of a new day of life, the seedtime, the flowering season, when life wears a roseate hue; the ripening fruits of experience, his harvest-time–it may be tares or golden grain; his gradual decay, the ebbing of the life forces and the icy winter of death; his gentle zephyrs and destructive hurricanes, floods and tempests, periods of drought and plenty. Within his triune constitution there are spring tides and low tides of physical, intellectual and spiritual forces. Man also makes the annual journey about the solar center, when, at the beginning of each new year to him, the life forces of his soul are renewed, revitalized, so to say, according to the magnetic polarity of his constitution.

And so, every form of life has its Zodiac, its orbit of life and destiny. It may be infinitesimal, or vast beyond conception, each in its own peculiar plane. So we see that, the whole visible universe is one vast organism, the medium of expression for the invisible, real universe– the soul and God, the great central Sun, the eternal center of all life, binding the whole into unity–ONE LIFE.

The celestial signs of the shining Zodiac have no existence to us apart from the graceful and unwearying motion of our Mother Earth. She alone makes our seasons, years and destiny; and she alone, by her motion about the Sun, determines the thrones and mansions of the planetary powers.

The astrological Zodiac of a Saturn or a Mars cannot be like ours. Their years and seasons are peculiar to themselves and their material conditions; hence the twelve constellations have no existence as objective facts of concrete formation or cosmic potentiality. No! But as unalterable symbols of occult truth, the starry pictures of the shining constellations have an eternal verity. They pertain to the living realities of the human soul and its varied experience.