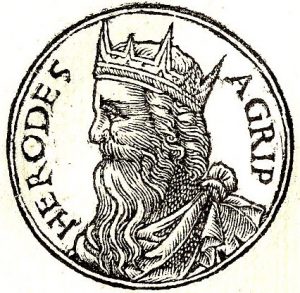 AGRIPPA, HEROD, I. (c. 10 B.C.-AD. 44), king of Judea, the son of Aristobulus and Berenice, and grandson of Herod the Great, was born about 10 B.C. His original name was Marcus Julius Agrippa.  Josephus informs us that, after the murder of his father, Herod the Great sent him to Rome to the court of Tiberius, who conceived a great affection for him, and placed him near his son Drusus, whose favor he very soon won.  On the death of Drusus, Agrippa, who had been recklessly extravagant, was obliged to leave Rome, overwhelmed with debt.  After a brief seclusion, Herod the Tetrarch, his uncle, who had married Herodias, his sister, made him Agoranomos (Overseer of Markets) of Tiberias, and presented him with a large sum of money; but his uncle being unwilling to continue his support, Agrippa left Judea for Antioch and soon after returned to Rome, where he was welcomed by Tiberius and became the constant companion of the emperor Gaius (Caligula), then a popular favorite.  Agrippa being one day overheard by Eutyches, a slave whom he had made free, to express a wish for Tiberius’ death and the advancement of Gaius, was betrayed to the emperor and cast into prison.

In A.D. 37 Caligula, having ascended the throne, heaped wealth and favors upon Agrippa, set a royal diadem upon his head and gave him the tetrarchy of Batanaea and Trachonitis, which Philip, the son of Herod the Great, had formerly possessed.  To this he added that held by Lysanias; and Agrippa returned very soon into Judea to take possession of his new kingdom.  In A.D. 39 he returned to Rome and brought about the banishment of Herod Antipas, to whose tetrarchy he succeeded.  On the assassination of Caligula (A.D. 41) Agrippa contributed much by his advice to maintain Claudius in possession of the imperial dignity, while he made a show of being in the interest of the senate.  The emperor, in acknowledgment, gave him the government of Judea, while the kingdom of Chalcis in Lebanon was at his request given to his brother Herod.  Thus Agrippa became one of the greatest princes of the east, the territory he possessed equaling in extent that held by Herod the Great.  He returned to Judea and governed it to the great satisfaction of the Jews.  His zeal, private and public, for Judaism is celebrated by Josephus and the rabbis; and the narrative of Acts xii. gives a typical example of it.

About the feast of the Passover A.D. 44, James the elder, the son of Zebedee and brother of John the evangelist, was seized by his order and put to death.  He proceeded also to lay hands on Peter and imprisoned him.  After the Passover he went to Caesarea, where he had games performed in honor of Claudius, and the inhabitants of Tyre and Sidon waited on him to sue for peace..  According to the story in Acts xii., Agrippa, gorgeously arrayed, received them in the theatre, and addressed them from a throne, while the audience cried out that his was the voice of a god.  But “the angel of the Lord smote him,” and shortly afterwards he died “eaten of worms.” The story in Acts differs slightly from that in Josephus, who describes how in the midst of his elation he saw an owl perched over his head.  During his confinement by Tiberius a like omen had been interpreted as portending his speedy release, with the warning that should he behold the same sight again he would die within’ five days.  He was immediately smitten with violent pains, and after a few days died.  Josephus says nothing of his being “eaten of worms,” but the discrepancies between the two stories are of slight moment.  A third account omits all the apocryphal elements in the story and says that Agrippa was assassinated by the Romans, who objected to his growing power.

AGRIPPA, HEROD, II. (27-100), son of the preceding, and like him originally Marcus Julius Agrippa, was born about A.D. 27, and received the tetrarchy of Chalcis and the oversight of the Temple on the death of his uncle Herod, A.D. 48. In A.D. 53 he was deprived of that kingdom by Claudius, who gave him other provinces instead of it.  In the war which Vespasian carried on against the Jews Herod sent him 2000 men, by which it appears that, though a Jew in religion, he was yet entirely devoted to the Romans, whose assistance indeed he required to secure the peace of his own kingdom.  He died at Rome in the third year of . Trajan, A.D. 100. He was the seventh and last king of the family of Herod the Great.  It was before him and his sister Berenice (q.v., B.2) that St Paul pleaded his cause at Caesarea (Acts xxvi.).  He supplied Josephus with information for his history.