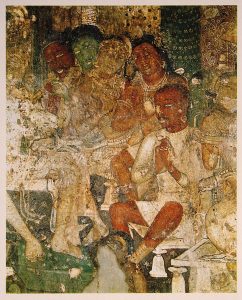 AJANTA (more properly AJUJNTHI), a village in the dominions of the Nizam of Hyderabad in India (N. lat. 20 deg.  32’ by E. long. 75 deg.  48’), celebrated for its cave hermitages and halls.  The caves are in a wooded and rugged ravine about 3 ½ m. from the village.  Along the bottom of the ravine runs the river Wagura, a mountain stream, which forces its way into the valley over a bluff on the east, and forms in its descent a beautiful waterfall, or rather series of waterfalls, 200 ft.  high, the sound of which must have been constantly audible to the dwellers in the caves.  These are about thirty in number, excavated in the south side of the precipitous bank of the ravine, and vary from 35 to 110 ft. in elevation above the bed of the torrent.  The caves are of two kinds—dwelling-halls and meeting-halls.  The former, as one enters from the pathway along the sides of the cliff, have a broad verandah, its roof supported by pillars, and giving towards the interior on to a hall averaging in size about 35 ft. by 20 ft.  To left and right, and at the back, dormitories are excavated opening on to this hall, and in the centre of the back, facing the entrance, an image of the Buddha usually stands in a niche.  The number of dormitories varies according to the size of the hall, and in the larger ones pillars support the roof on all three sides, forming a sort of cloister running round the hall.  The meeting-halls go back into the rock about twice as far as the dwelling-halls; the largest of them being 94 ½ ft. from the verandah to the back, and 41 ¼ ft. across, including the .  cloister.  They were used as chapter-houses for the meetings of the Buddhist Order.  The caves are in three groups, the oldest group being of various dates from 200 B.C. to A.D.  200, the second group belonging, approximately, to the 6th, and the third group to the 7th century A.D. Most of the interior walls of the caves were covered with fresco paintings, of a considerable degree of merit, and somewhat in the style of the early Italian painters.  When first discovered, in 1817, these frescoes were in a fair state of preservation, but they have since been allowed to go hopelessly to ruin.  Fortunately, the school of art in Bombay, especially under the supervision of J. Griffiths, had copied in colours a number of them before the last vestiges had disappeared, and other copies of certain of the paintings have also been made.  These copies are invaluable as being the only evidence we now have of pictorial art in India before the rise of Hinduism.  The expression “Cave Temples” used by Anglo-Indians of such halls is inaccurate.  Ajanta was a kind of college monastery.  Hsuan Tsang informs us that Dinnaga, the celebrated Buddhist philosopher and controversialist, author of well-known books on logic, resided there.  In its prime the settlement must have afforded accommodation for several hundreds, teachers and pupils combined.  Very few of the frescoes have been identified, but two are illustrations of stones in Arya Sura’s Jataka Mala, as appears from verses in Buddhist Sanskrit painted beneath them.