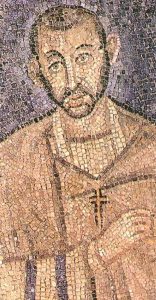 AMBROSE, SAINT (c. 340-307), bishop of Milan, one of the most eminent fathers of the church in the 4th century, was a citizen of Rome, born about 337-340 in Treves, where his father was prefect of Gallia Narbonensis.  His mother was a woman of intellect and piety.  Ambrose was early destined to follow his father’s career, and was accordingly educated in Rome.  He made such progress in literature, law and rhetoric, that the praetor Anicius Probus first gave him a place in the council and then made him consular prefect of Liguria and Emilia, with headquarters at Milan, where he made an excellent administrator. In 374 Auxentius, bishop of Milan, died, and the orthodox and Arian parties contended for the succession.  An address delivered to them at this crisis by Ambrose led to his being acclaimed as the only competent occupant of the see; though hitherto only a catechumen, he was baptized, and a few days saw him duly installed as bishop of Milan.  He immediately betook himself to the necessary studies, and acquitted himself in his new office with ability, boldness and integrity.  Having apportioned his money among the poor, and settled his lands upon the church, with the exception of making his sister Marcellina tenant during life, and having committed the care of his family to his brother, he entered upon a regular course of theological study, under the care of Simplician, a presbyter of Rome, and devoted himself to the labors of the church, labors which were temporarily interrupted by an invasion of Goths, which compelled Ambrose and other churchmen to retire to Illyricum.

The eloquence of Ambrose soon found ample scope in the dispute between the Arians and the orthodox or Catholic party, whose cause the new bishop espoused.  Gratian, the son of the elder Valentinian, took the same side; but the younger Valentinian, who had now become his colleague in the empire, adopted the opinions of the Arians, and all the arguments and eloquence of Ambrose could not reclaim the young prince to the orthodox faith.  Theodosius, the emperor of the East, also professed the orthodox belief; but there were many adherents of Arius scattered throughout his dominions.  In this distracted state of religious opinion, two leaders of the Arians, Palladius and Secundianus, confident of numbers, prevailed upon Gratian to call a general council from all parts of the empire.  This request appeared so equitable that he complied without hesitation; but Ambrose, foreseeing the consequence, prevailed upon the emperor to have the matter determined by a council of the Western bishops.  A synod, composed of thirty-two bishops, was accordingly held at Aquileia in the year 381. Ambrose was elected president; and Palladius, being called upon to defend his opinions, declined, insisting that the meeting was a partial one, and that, all the bishops of the empire not being present, the sense of the Christian church concerning the question in dispute could not be obtained.  A vote was then taken, when Palladius and his associate Secundianus were deposed from the episcopal office.

Ambrose was equally zealous in combating the attempt made by the upholders of the old state religion to resist the enactments of Christian emperors.  The pagan party was led by Quintus Aurelius Symmachus (q.v.), consul in 391, who presented to Valentinian II. a forcible but unsuccessful petition praying for the restoration of the altar of Victory to its ancient station in the hall of the senate, the proper support of seven vestal virgins, and the regular observance of the other pagan ceremonies. To this petition Ambrose replied in a letter to Valentinian, arguing that the devoted worshippers of idols had often been forsaken by their deities; that the native valor of the Roman soldiers had gained their victories, and not the pretended influence of pagan priests; that these idolatrous worshippers requested for themselves what they refused to Christians; that voluntary was more honorable than constrained virginity; that as the Christian ministers declined to receive temporal emoluments, they should also be denied to pagan priests; that it was absurd to suppose that God would inflict a famine upon the empire for neglecting to support a religious system contrary to His will as revealed in the Scriptures; that the whole process of nature encouraged innovations, and that all nations had permitted them even in religion; that heathen sacrifices were offensive to Christians; and that it was the duty of a Christian prince to suppress pagan ceremonies.  In the epistles of Symmachus and of Ambrose both the petition and the reply are preserved.  They are a strange blend of sophistry, superstition, sound sense and solid argument.

The increasing strength of the Arians proved a formidable task for Ambrose.  In 384 the young emperor and his mother Justina, along with a considerable number of clergy and laity professing the Arian faith, requested from the bishop the use of two churches, one in the city, the other in the suburbs of Milan.  Ambrose refused, and was required to answer for his conduct before the council.  He went, attended by a numerous crowd of people, whose impetuous zeal so overawed the ministers of Valentinian that he was permitted to retire without making the surrender of the churches.  The day following, when he was performing divine service in the Basilica, the prefect of the city came to persuade him to give up at least the Portian church in the suburbs. As he still continued obstinate, the court proceeded to violent measures: the officers of the household were commanded to prepare the Basilica and the Portian churches to celebrate divine service upon the arrival of the emperor and his mother at the ensuing festival of Easter.  Perceiving the growing strength of the prelate’s interest, the court deemed it prudent to restrict its demand to the use of one of the churches.  But all entreaties proved in vain, and drew forth the following characteristic declaration from the bishop: — “If you demand my person, I am ready to submit: carry me to prison or to death, I will not resist; but I will never betray the church of Christ.  I will not call upon the people to succor me; I will die at the foot of the altar rather than desert it.  The tumult of the people I will not encourage: but God alone can appease it.”

Many circumstances in the history of Ambrose are strongly characteristic of the general spirit of the times.  The chief causes of his victory over his opponents were his great popularity and the superstitious reverence paid to the episcopal character at that period.  But it must also be noted that he used several indirect means to obtain and support his authority with the people. He was liberal to the poor; it was his custom to comment severely in his preaching on the public characters of his times; and he introduced popular reforms in the order and manner of public worship.  It is alleged, too, that at a time when the influence of Ambrose required vigorous support, he was admonished in a dream to search for, and found under the pavement of the church, the remains of two martyrs, Gervasius and Protasius. The applause of the vulgar was mingled with the derision of the court party.

Although the court was displeased with the religious principles and conduct of Ambrose, it respected his great political talents; and when necessity required, his aid was solicited and generously granted.  When Maximus usurped the supreme power in Gaul, and was meditating a descent upon Italy, Valentinian sent Ambrose to dissuade him from the undertaking, and the embassy was successful.  On a second attempt of the same kind Ambrose was again employed; and although he was unsuccessful, it cannot be doubted that, if his advice had been followed, the schemes of the usurper would have proved abortive; but the enemy was permitted to enter Italy; and Milan was taken. Justina and her son fled; but Ambrose remained at his post, and did good service to many of the sufferers by causing the plate of the church to be melted for their relief.  Theodosius, the emperor of the East, espoused the cause of Justina, and regained the kingdom.  This Theodosius was sternly rebuked by Ambrose for the massacre of 7000 persons at Thessalonica in 390, and was bidden imitate David in his repentance as he had imitated him in guilt.

In 302, after the assassination of Valentinian and the usurpation of Eugenius, Ambrose fled from Milan; but when Theodosius was eventually victorious, he supplicated the emperor for the pardon of those who had supported Eugenius.  Soon after acquiring the undisputed possession of the Roman empire, Theodosius died at Milan in 395, and two years later (4th April 397) Ambrose also passed away.  He was succeeded by Simplician.

A man of pure character, vigorous mind, unwearying zeal and uncommon generosity, Ambrose ranks high among the fathers of the ancient church on many counts.  His chief faults were ambition and bigotry.  Though ranking with Augustine, Jerome, and Gregory the Great, as one of the Latin “doctors,” he is most naturally compared with Hilary, whom he surpasses in administrative excellence as much as he falls below him in theological ability.  Even here, however, his achievements are of no mean order, especially when we remember his juridical training and his comparatively late handling of Biblical and doctrinal subjects.  In matters of exegesis he is, like Hilary, an Alexandrian; his chief productions are homiletic commentaries on the early Old Testament narratives, e.g.  the Hexaemeron (Creation) and Abraham, some of the Psalms, and the Gospel according to Luke.  In dogmatic he follows Basil of Caesarea and other Greek authors, but nevertheless gives a distinctly Western cast to the speculations of which he treats.  This is particularly manifest in the weightier emphasis which he lays upon human sin and divine grace, and in the place which he assigns to faith in the individual Christian life.  His chief works in this field are De fide ad Gratianuni Augustunn, De Spiritu Sancto, De incarnationis Dominicae sacramento, De mysteriis. His great spiritual successor, Augustine, whose conversion was helped by Ambrose’s sermons, owes more to him than to any writer except Paul.  Ambrose’s intense episcopal consciousness furthered the growing doctrine of the Church and its sacerdotal ministry, while the prevalent asceticism of the day, continuing the Stoic and Ciceronian training of his youth, enabled him to promulgate a lofty standard of Christian ethics.  Thus we have the De officiis ministrorum, De viduis, De virginitate and De paenitentia.

Ambrose has also left several funeral orations and ninety- one letters, but it is as a hymn-writer that he perhaps deserves most honor.  Catching the impulse from Hilary and confirmed in it by the success of Arian psalmody, Ambrose composed several hymns, marked by dignified simplicity, which were not only effective in themselves but served as a fruitful model for later times.  We cannot certainly assign to him more than four or five (Deus Creator Omnium, Aeterne rerum conditor, Jam surgit hora tertia, and the Christmas hymn Veni redemptor gentium) of those that have come down to us.  Each of these hymns has eight four-line stanzas and is written in strict iambic tetrameter.