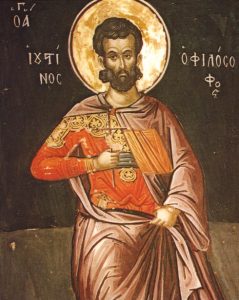 AMEN, a Hebrew word, of which the root meaning is “stability,” generally adopted in Christian worship as a concluding formula for prayers and hymns.  Three distinct biblical usages may be noted. (a) Initial Amen, referring back to words of another speaker, e.g. 1 Kings i. 36; Rev. xxii. 20. (b) Detached Amen, the complementary sentence being suppressed, e.g. Neh. v. 13; Rev. v. 14 (cf. 1 Cor. xiv. 16).  (c) Final Amen, with no change of speaker, as in the subscription to the first three divisions of the Psalter and in the frequent doxologies of the New Testament Epistles.  The uses of amen (“verily”) in the Gospels form a peculiar class; they are initial, but often lack any backward reference.  Jesus used the word to affirm his own utterances, not those of another person, and this usage was adopted by the church.

The liturgical use of the word in apostolic times is attested by the passage from 1 Cor. cited above, and Justin Martyr (c. A.D. 150) describes the congregation as responding “amen,” to the benediction after the celebration of the Eucharist. Its introduction into the baptismal formula (in the Greek Church it is pronounced after the name of each person of the Trinity) is probably later.  Among certain Gnostic sects Amen became the name of an angel, and in post-biblical Jewish works exaggerated statements are multiplied as to the right method and the bliss of pronouncing it.  It is still used in the service of the synagogue, and the Muslim not only add it after reciting the first Sura of the Koran, but also when writing letters, etc., and repeat it three times, often with the word Qimtir, some say as a kind of talisman.