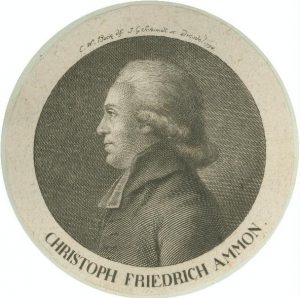 AMMON, CHRISTOPH FRIEDRICH VON (1766-1850), German theological writer and preacher, was born at Bayreuth.  He studied at Erlangen, held various professorships in the philosophical and theological faculties of Erlangen and Gottingen, succeeded Franz Reinhard (1753-1812) in 1813 as court preacher and member of the consistorial court at Dresden, retired from these offices in 1849, and died on the 21st of May 1850.  Seeking to establish for himself a middle position between rationalism and supernaturalism, he declared for a “rational supernaturalism,” and contended that there must be a gradual development of Christian doctrine corresponding to the advance of knowledge and science.  But at the same time he sought, like other representatives of this school of thought, such as K. G. Bretschneider and Julius Wegscheider, to keep in close touch with the historical theology of the Protestant churches.  He was a man of great versatility and extensive learning, a philologist and philosopher as well as a theologian, and a very voluminous author.  His principal theological work was the Fortbildung des Christenthums zur Weltreligion, in 4 volumes (Leipzig, 1833-1840). Entwurf einer reinbiblischen Theologie appeared in 1792 (2nd ed., 1801), Summa Theologiae Christianae in 1803 (other editions, 1808, 1816, 1830); Das Leben Jesu in 1842, and Die wahre und falsche Orthodoxie in 1849.  Von Ammon’s style in preaching was terse and lively, and some of his discourses are regarded as models of pulpit treatment of political questions.