Astrology and the Tarot 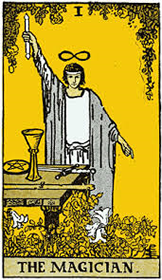 Since astrology and the tarot are both occult symbol systems, it is not surprising that numerous attempts have been made to integrate, or at least correlate, the two.  Papus, in The Tarot of the Bohemians, devotes a full chapter to “The Astronomical Tarot,” and later writers have generally followed his lead.  While it is not necessary to understand astrology in order to successfully read tarot cards, some comprehension of the two systems can be helpful.

The foundation of astrology is the zodiac, twelve constellations that appear to be circling the earth when viewed from our planet.  These constellations, or signs, are correlated with the tarot as follows:

Thus, depending on the reading and the placement of a particular card, a King of Pentacles might signify a person whose sun sign is in Capricorn, or someone with Capricorn-like (or saturnine, since Saturn rules Capricorn) characteristics.  One problem with this system is that one can end up saying a Queen of Swords (which intuitively seems like it should be a female) could signify a Scorpio male.   Nevertheless, it’s an interesting concept.

More successful, perhaps, is Oswald Wirth’s correlation of constellations with the twenty-two cards of the major arcana.  His list looks like this:

Wirth’s list is interesting in that it has some match-ups which seem obvious (e.g., Libra, the Scales, correlates with Justice) and some which do not: in astrology the Sun is strongly associated with Leo, and we might have thought that the major arcana card The Sun would do the same, but here it is paired with Gemini.  The Moon certainly does seem to go with Cancer, Strength is a Leo characteristic, the Wheel of Fortune is matched with the materialistic constellation of Capricornus, and so on.