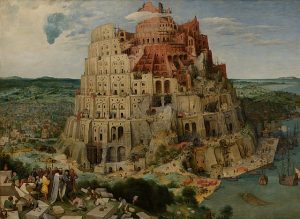 BABEL, the native name of the city called Babylon by the Greeks, the modern Hillah. It means “gate of the god,” not “gate of the gods,” corresponding to the Assyrian Bāb-ili. According to Gen. xi 1-9 (J), mankind, after the deluge, travelled from the mountain of the East, where the ark had rested, and settled in Shinar. Here they attempted to build a city and a tower whose top might reach unto heaven, but were miraculously prevented by their language being confounded. In this way the diversity of human speech and the dispersion of mankind were accounted for; and in Gen. xi. 9 (J) an etymology was found for the name of Babylon in the Hebrew verb bālal, “to confuse or confound,” Babel being regarded as a contraction of Balbel. In Gen. x. 10 it is said to have formed part of the kingdom of Nimrod.

The origin of the story has not been found in Babylonia. The tower was no doubt suggested by one of the temple towers of Babylon. W. A. Bennet (Genesis, p. 169; cf. Hommel in Hastings’ Dictionary of the Bible) suggests E-Saggila, the great temple of Merodach (Marduk). The variety of languages and the dispersion of mankind were regarded as a curse, and it is probable that, as Prof. Cheyne (Encyclopaedia Biblica, col. 411) says, there was an ancient North Semitic myth to explain it. The event was afterwards localized in Babylon. The myth, as it appears in Genesis, is quite polytheistic and anthropomorphic. According to Cornelius Alexander (frag. 10) and Abydenus (frags. 5 and 6) the tower was overthrown by the winds; according to Yaqut (i. 448 f.) and the Lisan el-‛Arab (xiii. 72) mankind were swept together by winds into the plain afterwards called “Babil,” and were scattered again in the same way (see further D. B. Macdonald in the Jewish Encyclopaedia). A tradition similar to that of the tower of Babel is found in Central America. Xelhua, one of the seven giants rescued from the deluge, built the great pyramid of Cholula in order to storm heaven. The gods, however, destroyed it with fire and confounded the language of the builders. Traces of a somewhat similar story have also been met with among the Mongolian Tharus in northern India (Report of the Census of Bengal, 1872, p. 160), and, according to Dr Livingstone, among the Africans of Lake Ngami. The Esthonian myth of “the Cooking of Languages” (Kohl, Reisen in die Ostseeprovinzen, ii. 251-255) may also be compared, as well as the Australian legend of the origin of the diversity of speech (Gerstäcker, Reisen, vol. iv. pp. 381 seq.).