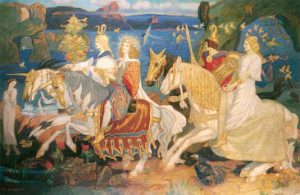 By James A. MacCulloch

Whether the early Celts regarded Heaven and Earth as husband and wife is uncertain. Such a conception is world-wide, and myth frequently explains in different ways the reason of the separation of the two. Among the Polynesians the children of heaven and earth—the winds, forests, and seas personified—angry at being crushed between their parents in darkness, rose up and separated them. This is in effect the Greek myth of Uranus, or Heaven, and Gaea, or Earth, divorced by their son Kronos, just as in Hindu myth Dyaus, or Sky, and Prithivi, or Earth, were separated by Indra. Uranus in Greece gave place to Zeus, and, in India, Dyaus became subordinate to Indra. Thus the primitive Heaven personified recedes, and his place is taken by a more individualized god. But generally Mother Earth remains a constant quantity. Earth was nearer man and was more unchanging than the inconstant sky, while as the producer of the fruits of the earth, she was regarded as the source of all things, and frequently remained as an important divinity when a crowd of other divinities became prominent. This is especially true of agricultural peoples, who propitiate Earth with sacrifice, worship her with orgiastic rites, or assist her processes by magic. With advancing civilization such a goddess is still remembered as the friend of man, and, as in the Eleusinia, is represented sorrowing and rejoicing like man himself. Or where a higher religion ousts the older one, the ritual is still retained among the folk, though its meaning may be forgotten.

The Celts may thus have possessed the Heaven and Earth myth, but all trace of it has perished. There are, however, remnants of myths showing how the sky is supported by trees, a mountain, or by pillars. A high mountain near the sources of the Rhone was called “the column of the sun,” and was so lofty as to hide the sun from the people of the south. It may have been regarded as supporting the sky, while the sun moved round it. In an old Irish hymn and its gloss, Brigit and Patrick are compared to the two pillars of the world, probably alluding to some old myth of sky or earth resting on pillars. Traces of this also exist in folk-belief, as in the accounts of islands resting on four pillars, or as in the legend of the church of Kernitou which rests on four pillars on a congealed sea and which will be submerged when the sea liquefies—a combination of the cosmogonic myth with that of a great inundation. In some mythologies a bridge or ladder connects heaven and earth. There may be a survival of some such myth in an Irish poem which speaks of the drochet bethad, or “bridge of life,” or in the drochaid na flaitheanas, or “bridge of heaven,” of Hebridean folk-lore.

Those gods who were connected with the sky may have been held to dwell there or on the mountain supporting it. Others, like the Celtic Dispater, dwelt underground. Some were connected with mounds and hills, or were supposed to have taken up their abode in them. Others, again, dwelt in a distant region, the Celtic Elysium, which, once the Celts reached the sea, became a far-off island. Those divinities worshipped in groves were believed to dwell there and to manifest themselves at midday or midnight, while such objects of nature as rivers, wells, and trees were held to be the abode of gods or spirits. Thus it is doubtful whether the Celts ever thought of their gods as dwelling in one Olympus.  The Tuatha De Danann are said to have come from heaven, but this may be the mere assertion of some scribe who knew not what to make of this group of beings.

In Celtic belief men were not so much created by gods as descended from them. “All the Gauls assert that they are descended from Dispater, and this, they say, has been handed down to them by the Druids.” Dispater was a Celtic underworld god of fertility, and the statement probably presupposes a myth, like that found among many primitive peoples, telling how men once lived underground and thence came to the surface of the earth. But it also points to their descent from the god of the underworld. Thither the dead returned to him who was ancestor of the living as well as lord of the dead. On the other hand, if the earth had originally been thought of as a female, she as Earth-mother would be ancestress of men. But her place in the myth would easily be taken by the Earth or Under-earth god, perhaps regarded as her son or her consort. In other cases, clans, families, or individuals often traced their descent to gods or divine animals or plants. Classical writers occasionally speak of the origin of branches of the Celtic race from eponymous founders, perhaps from their knowledge of existing Celtic myths. Ammianus Marcellinus also reports a Druidic tradition to the effect that some Gauls were indigenous, some had come from distant islands, and others from beyond the Rhine. But this is not so much a myth of origins, as an explanation of the presence of different peoples in Gaul—the aborigines, the Celtae, and the Belgic Gauls. M.  D’Arbois assumes that “distant islands” means the Celtic Elysium, which he regards as the land of the dead, but the phrase is probably no more than a distorted reminiscence of the far-off lands whence early groups of Celts had reached Gaul.

Of the creation of the world no complete myth has survived, though from a gloss to the Senchus Mor we learn that the Druids, like the Brahmans, boasted that they had made sun, moon, earth, and sea—a boast in keeping with their supposed powers over the elements. Certain folk-beliefs, regarding the origin of different parts of nature, bear a close resemblance to primitive cosmogonic myths, and they may be taken as disjecta membra of similar myths held by the Celts and perhaps taught by the Druids. Thus sea, rivers, or springs arose from the micturition of a giant, fairy, or saint, or from their sweat or blood. Islands are rocks cast by giants, and mountains are the material thrown up by them as they were working on the earth. Wells sprang up from the blood of a martyr or from the touch of a saint’s or a fairy’s staff. The sea originated from a magic cask given by God to a woman. The spigot, when opened, could not be closed again, and the cask never ceased running until the waters covered the earth—a tale with savage parallels. In all these cases, giant, saint, or fairy has doubtless taken the place of a god, since the stories have a very primitive facies. The giant is frequently Gargantua, probably himself once a divinity. Other references in Irish texts point to the common cosmogonic myth of the earth having gradually assumed its present form.  Thus many new lakes and plains are said to have been formed in Ireland during the time of Partholan and Nemed, the plains being apparently built up out of existing materials. In some cases the formation of a lake was the result of digging the grave of some personage after whom the lake was then named. Here we come upon the familiar idea of the danger of encroaching on the domain of a deity, e.g. that of the Earth-god, by digging the earth, with the consequent punishment by a flood. The same conception is found in Celtic stories of a lake or river formed from the overflowing of a sacred well through human carelessness or curiosity, which led to the anger of the divinity of the well. Or, again, a town or castle is submerged on account of the wickedness of its inhabitants, the waters being produced by the curse of God or a saint (replacing a pagan god) and forming a lake. These may be regarded as forms of a Celtic deluge-myth, which in one case, that of the Welsh story of the ship of Nevyd, which saved Dwyvan and Dwyfach and a pair of all kinds of animals when Lake Llion overflowed, has apparently borrowed from the Biblical story. In other cases lakes are formed from the tears of a god, e.g. Manannan, whose tears at the death of his son formed three lochs in Erin. Apollonius reports that the waters of Eridanus originated from the tears of Apollo when driven from heaven by his father. This story, which he says is Celtic, has been clothed by him in a Greek form, and the god in question may have been Belenos, equated with Apollo. Sometimes the formation of streams was ascribed to great hail-storms—an evident mythic rendering of the damage done by actual spates, while the Irish myths of “illimitable sea-bursts,” of which three particular instances are often mentioned, were doubtless the result of the experience of tidal waves.

Although no complete account of the end of all things, like that of the Scandinavian Ragnarok, has survived, scattered hints tell of its former existence. Strabo says that the Druids taught that “fire and water must one day prevail”—an evident belief in some final cataclysm. This is also hinted at in the words of certain Gauls to Alexander, telling him that what they feared most of all was the fall of the heavens upon their heads. In other words, they feared what would be the signal of the end of all things. On Irish ground the words of Conchobar may refer to this. He announced that he would rescue the captives and spoil taken by Medb, unless the heavens fell, and the earth burst open, and the sea engulfed all things. Such a myth mingled with Christian beliefs may underlie the prophecy of Badb after Mag-tured regarding the evils to come and the end of the world, and that of Fercertne in the Colloquy of the Two Sages. Both have a curious resemblance to the Sybil’s prophecy of doom in the Voluspa. If the gods themselves were involved in such a catastrophe, it would not be surprising, since in some aspects their immortality depended on their eating and drinking immortal food and drink.