Kansas, Carl Jung, and the Atman 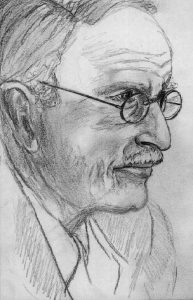 Sometimes, things just seem to come together. Call it fate. Call it kismet. Call it a meaningful coincidence. Or, if you’re a Carl Jung fan, call it Synchronicity, An Acausal Connecting Principle.

For those not around in the 1960s and early 1970s – which, more and more, seems like everyone except me – let me begin by pointing out that Jung, the Swiss psychoanalyst, was a big deal back then. There were a few reasons for that:

To this last point, I’ll just mention that as a young man Jung might have been a poltergeist, and it affected him and his work strongly. His dissertation for his M.D. degree, Zur Psychologie und Pathologie sogenannter occulter Phanomene can be translated as, “On the Psychology and Pathology of So-called Occult Phenomena.”

Jung later gave an exposition of his theory of Synchronicity in an introduction he wrote to an edition of the I Ching. I won’t go deeply into the theory here, other than to say that what we view as coincidence might instead be a meaningful pattern of connections somehow related to the collective unconscious.

Which brings me to the rock group Kansas. Sort of.

On my personal website I have a list of the 100 Greatest Rock Songs of All Time. It’s a fairly popular list, and people send me emails about it somewhat frequently. Kansas’ “Dust in the Wind” came in at number 52, but this isn’t about that song.

Instead, a reader – I’ll call him Richard W – wrote and suggested that I “should add Incomudro-Hymn to the Atman by Kansas – from their Song For America album at the top of your list of greatest rock songs.”

I’d never heard the song, so I had to play it on YouTube. It’s an interesting song, with interesting lyrics, and lasts for over twelve minutes. (Wow!) But, let’s face it, it might be just a tad too obscure to make it to the Top 100.

This is where synchronicity comes in.

Because, when I received Richard’s email, I was just finishing reading Swami Tyagananda’s small but fascinating book, Walking the Walk; A Karma Yoga Manual, which makes frequent reference to the Atman. In fact, according to the book, each of us might actually be the Atman and just not realize it, which is why we might need to practice karma yoga.

So . . . coincidence? Meaningful pattern of connection? Is the collective unconscious trying to tell me something?

And, since you’ve read this far . . . is the collective unconscious trying to tell you something?

And why are those Kansas songs so darned philosophical?

One last note, which has nothing to do with Kansas or with Swami Tyagananda but which somehow feels right to include: Later in life, Jung recounted that, “”Professor Einstein was my guest on several occasions at dinner. . . These were very early days when Einstein was developing his first theory of relativity, [and] it was he who first started me off thinking about a possible relativity of time as well as space, and their psychic conditionality. More than thirty years later, this stimulus led to my relation with the physicist Professor W. Pauli and to my thesis of psychic synchronicity.”