The Law of Prosperity 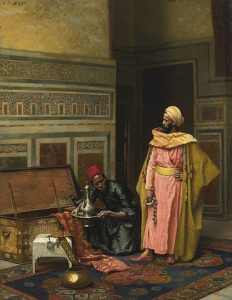 One of the greatest messages given to the race through the scriptures is that God is man’s supply and that man can release, through his spoken word, all that belongs to him by divine right. He must, however, have perfect faith in his spoken word. Isaiah said, “My word shall not return unto me void, but shall accomplish that where it is sent.” We know now, that words and thoughts are a tremendous vibratory force, ever moulding man’s body and affairs.

A woman came to me in great distress and said she was to be sued on the fifteenth of the month for three thousand dollars. She knew no way of getting the money and was in despair.

I told her God was her supply, and that there is a supply for every demand.

So I spoke the word! I gave thanks that the woman would receive three thousand dollars at the right time in the right way. I told her she must have perfect faith, and act her perfect faith. The fifteenth came but no money had materialized.

She called me on the ‘phone and asked what she was to do.

I replied, “It is Saturday, so they won’t sue you today, Your part is to act rich, thereby showing perfect faith that you will receive it by Monday.” She asked me to lunch with her to keep up her courage. When I joined her at a restaurant, I said, “This is no time to economize. Order an expensive luncheon, act as if you have already received the three thousand dollars.”

“All things whatsoever ye ask in prayer, believing, ye shall receive.” “You must act as if you had already received.” The next morning she called me on the ‘phone and asked me to stay with her during the day, I said “No, you are divinely protected and God is never too late.”

In the evening she ‘phoned again, greatly excited and said, “My dear, a miracle has happened! I was sitting in my room this morning, when the doorbell rang, I said to the maid: ‘Don’t let anyone in.’ The maid however, looked out the window and said, ‘It’s your cousin with the long white beard.’

So I said, ‘Call him back. I would like to see him.’ He was just turning the corner, when he heard the maid’s voice, and he came back.

He talked for about an hour, and just as he was leaving he said, ‘Oh, by the way, how are finances?’

I told him I needed the money, and he said, ‘Why, my dear, I will give you three thousand dollars the first of the month.

I didn’t like to tell him I was going to be sued. What shall I do? I won’t receive it till the first of the month, and I must have it tomorrow.” I said, “I’ll keep on ‘treating.'”

I said, “Spirit is never too late. I give thanks she has received the money on the invisible plane and that it manifests on time.” The next morning her cousin called her up and said, “Come to my office this morning and I will give you the money.” That afternoon, she had three thousand dollars to her credit in the bank, and wrote checks as rapidly as her excitement would permit.

If one asks for success and prepares for failure, he will get the situation he has prepared for. For example: A man came to me asking me to speak the word that a certain debt would be wiped out.

I found he spent his time planning what he would say to the man when he did not pay his bill, thereby neutralizing my words. He should have seen himself paying the debt.

We have a wonderful illustration of this in the bible, relating to the three kings who were in the desert, without water for their men and horses. They consulted the prophet Elisha, who gave them this astonishing message:

“Thus saith the Lord – Ye shall not see wind, neither shall ye see rain, yet make this valley full of ditches.”

Man must prepare for the thing he has asked for, when there isn’t the slightest sign of it in sight.

For example: A woman found it necessary to look for an apartment during the year when there was a great shortage of apartments in New York. It was considered almost an impossibility, and her friends were sorry for her and said, “Isn’t it too bad, you’ll have to store your furniture and live in a hotel.” She replied, “You needn’t feel sorry for me, I’m a superman, and I’ll get an apartment.”

She spoke the words: “Infinite Spirit, open the way for the right apartment.” She knew there was a supply for every demand, and that she was “unconditioned,” working on the spiritual plane, and that “one with God is a majority.”

She had contemplated buying new blankets, when the “tempter,” the adverse thought or reasoning mind, suggested, “Don’t buy the blankets, perhaps, after all, you won’t get an apartment and you will have no use for them.” She promptly replied (to herself): “I’ll dig my ditches by buying the blankets!” So she prepared for the apartment – acted as though she already had it.

She found one in a miraculous way, and it was given to her although there were over two hundred other applicants.

It is needless to say that the ditches dug by the three kings in the desert were filled to over-flowing. (Read, II Kings)

Getting into the spiritual swing of things is no easy matter for the average person. The adverse thoughts of doubt and fear surge from the subconscious. They are the “army of the aliens” which must be put to flight. This explains why it is so often, “darkest before the dawn.”

A big demonstration is usually preceded by tormenting thoughts.

Having made a statement of high spiritual truth one challenges the old beliefs in the subconscious, and “error is exposed” to be put out.

This is the time when one must make his affirmations of truth repeatedly, and rejoice and give thanks that he has already received, “Before ye call I shall answer.” This means that “every good and perfect gift” is already man’s awaiting his recognition.

Man can only receive what he sees himself receiving.

The children of Israel were told that they could have all the land they could see. This is true of every man. He has only the land within his own mental vision. Every great work, every big accomplishment, has been brought into manifestation through holding to the vision, and often just before the big achievement, comes apparent failure and discouragement.

The children of Israel when they reached the “Promised Land,” were afraid to go in, for they said it was filled with giants who made them feel like grasshoppers. “And there we saw the giants and we were in our own sight as grass-hoppers.” This is almost every man’s experience.

However, the one who knows spiritual law, is undisturbed by appearance, and rejoices while he is “yet in captivity.” That is, he holds to his vision and gives thanks that the end is accomplished, he has received.

Jesus Christ gave a wonderful example of this. He said to his disciples: “Say not ye, there are yet four months and then cometh the harvest? Behold, I say unto you, lift up your eyes and look on the fields; for they are ripe already to harvest.” His clear vision pierced the “world of matter” and he saw clearly the fourth dimensional world, things as they really are, perfect and complete in Divine Mind. So man must ever hold the vision of his journey’s end and demand the manifestation of that which he has already received. It may be his perfect, health, love, supply, self-expression, home or friends.

They are all finished and perfect ideas registered in Divine Mind (man’s own superconscious mind) and must come through him, not to him.

For example: A man came to me asking for treatments for success. It was imperative that he raise, within a certain, fifty-thousand dollars for his business. The time limit was almost up, when he came to me in despair. No one wanted to invest in his enterprise, and the bank had flatly refused a loan.

I replied: “I suppose you lost your temper while at the bank, therefore your power. You can control any situation if you first control yourself.”

“Go back to the bank,” I added, “and I will treat.” My treatment was: “You are identified in love with the spirit of everyone connected with the bank. Let the divine idea come out of this situation.”

He replied, “Woman, you are talking about an impossibility. Tomorrow is Saturday; the bank closes at twelve, and my train won’t get me there until ten, and the time limit is up tomorrow, and anyway they won’t do it. It’s too late.”

I replied, “God doesn’t need any time and is never too late. With Him all things are possible.” I added, “I don’t know anything about business, but I know all about God.” He replied: “It all sounds fine when I sit here listening to you, but when I go out it’s terrible.”

He lived in a distant city, and I did not hear from him for a week, then came a letter. It read: “You were right. I raised the money, and will never again doubt the truth of all that you told me.”

I saw him a few weeks later, and I said, “what happened? You evidently had plenty of time, after all.” He replied, “My train was late, and I got there just fifteen minutes to twelve. I walked into the bank quietly and said, ‘I have come for the loan,’ and they gave it to me without a question.”

It was the last fifteen minutes of the time allotted to him, and Infinite Spirit was not too late. In this instance the man could never have demonstrated alone. He needed someone to help him hold to the vision. This is what one man can do for another.

Jesus Christ knew the truth of this when he said: “If two of you shall agree on earth as touching anything that they shall ask, it shall be done for them of my Father which is in heaven.” One gets too close to his own affairs and becomes doubtful and fearful.

The friend or “healer” sees clearly the success, health, or prosperity, and never wavers, because he is not close to the situation.

It is much easier to “demonstrate” for someone else than for one’s self, so a person should not hesitate to ask for help, if he feels himself wavering.

A keen observer of life once said, “no man can fail, if some one person sees him successful.” Such is the power of the vision, and many a great man owed his success to a wife, or sister, or a friend who “believed in him” and held without wavering to the perfect pattern!

This is taken from The Game of Life.