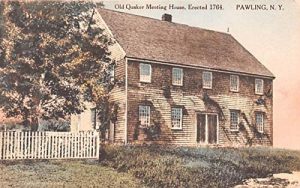 Monthly court or meeting—constitution of this meeting—each county is usually divided into parts—in each of these parts or divisions are several meeting-houses, which have their several congregations attached to them—one meeting-house in each division is fixed upon for transacting the business of all the congregations in that division—deputies appointed from every particular meeting or congregation in each division to the place fixed upon for transacting the business within it—nature of the business to be transacted—women become deputies, and transact business, equally with the men.

I come, after this long digression, to the courts of the Quakers. And here I shall immediately premise, that I profess to do little more than to give a general outline of these. I do not intend to explain the proceedings, preparatory to the meetings there, or to state all the exceptions from general rules, or to trouble the memory of the reader with more circumstances than will be sufficient to enable him to have a general idea of this part of the discipline of the Quakers.

The Quakers manage their discipline by means of monthly, quarterly, and yearly courts, to which, however they themselves uniformly give the name of meetings.

To explain the nature and business of the monthly or first of these meetings, I shall fix upon some county in my own mind, and describe the business, that is usually done in this in the course of the month. For as the business, which is usually transacted in any one county, is done by the Quakers in the same manner and in the same month in another, the reader, by supposing an aggregate of counties, may easily imagine, how the whole business of the society is done for the whole kingdom.

At length the day arrives for the monthly meeting. The deputies make ready to execute the duties committed to their trust. They repair, each set of them, to their respective places of meeting. Here a number of Quakers, of different ages and of both sexes, from their different divisions, repair also. It is expected that all, who can conveniently attend, should be present on this occasion.

When they are collected at the meeting-house, which was said to have been fixed upon in each division, a meeting for worship takes place. All persons, both men and women, attend together. But when this meeting is over, they separate into different apartments for the purposes of the discipline; the men to transact by themselves the business of the men, and of their own district, the women to transact that, which is more limited, namely such as belongs to their own sex.

In the men’s meeting, and it is the same in the women’s, the names of the deputies before mentioned, are first entered in a book, for, until this act takes place, the meeting for discipline is not considered to be constituted.

The minutes of the last monthly meeting are then generally read, by which it is seen if any business of the society was left unfinished.  Should any thing occur of this sort, it becomes the first object to be considered and dispatched.

The new business, in which the deputies were said to have been previously instructed by the congregations which they represented comes on. This business may be of various sorts. One part of it uniformly relates to the poor. The wants of these are provided for, and the education of their children taken care of, at this meeting.  Presentations of marriages are received, and births, marriages, and funerals are registered. If disorderly members, after long and repeated admonitions, should have given no hopes of amendment, their case is first publicly cognizable in this court. Committees are appointed to visit, advise, and try to reclaim them. Persons, reclaimed by these visitations, are restored to membership, after having been well reported of by the parties deputed to visit them. The fitness of persons, applying for membership, from other societies, is examined here. Answers also are prepared to the queries at the proper time. Instructions also are given, if necessary, to particular meetings, suited to the exigencies of their cases; and certificates are granted to members on various occasions.

In transacting this, and other business of the society, all members present we allowed to speak. The poorest man in the meeting-house, though he may be receiving charitable contributions at the time, is entitled to deliver his sentiments upon any point. He may bring forward new matter. He may approve or object to what others have proposed before him. No person may interrupt him, while he speaks. The youth, who are sitting by, are gaining a knowledge of the affairs and discipline of the society, and are gradually acquiring sentiments and habits, that are to mark their character in life. They learn, in the first place, the duty of a benevolent and respectful consideration for the poor. In hearing the different cases argued and discussed, they learn, in some measure, the rudiments of justice, and imbibe opinions of the necessity of moral conduct. In these courts they learn to reason. They learn also to hear others patiently, and without interruption, and to transact business, that may come before them in maturer years with regularity and order.

I cannot omit to mention here the orderly manner in which, the Quakers, conduct their business on these occasions. When a subject is brought before them, it is canvassed to the exclusion of all extraneous matter, till some conclusion results. The clerk of the monthly meeting then draws up a minute, containing, as nearly as he can collect, the substance of this conclusion. This minute is then read aloud to the auditory, and either stands or undergoes an alteration, as appears, by the silence or discussion upon it, to be the sense of the meeting. When fully agreed upon, it stands ready to be recorded. When a second subject comes on, it is canvassed, and a minute is made of it, to be recorded in the same manner, before a third is allowed to be introduced. Thus each point is settled, till the whole business of the meeting is concluded.

I may now mention that in the same manner as the men proceed in their apartment on this occasion, the women proceed in their own apartment or meeting also. There are women-deputies, and women-clerks. They enter down the names of these deputies, read the minutes, of the last monthly meeting, bring forward the new matter, and deliberate and argue on the affairs of their own sex. They record their proceedings equally. The young females also, are present, and have similar opportunities of gaining knowledge, and of improving their judgments, and of acquiring useful and moral habits, as the young men.

It is usual, when the women have finished the business of their own meeting, to send one of their members to the apartments of the men, to know if they have any thing to communicate. This messenger having returned, and every thing having been settled and recorded in both meetings, the monthly meeting is over, and men, women, and youth of both sexes, return to their respective homes.

In the same manner as the different congregations, or members of the different meetings, in any one division of the county, meet together, and transact their monthly business, so other different congregations, belonging to other divisions of the same county, meet at other appointed places, and dispatch their business also. And in the same manner as the business is thus done in one county, it is done in every other county of the kingdom once a month.