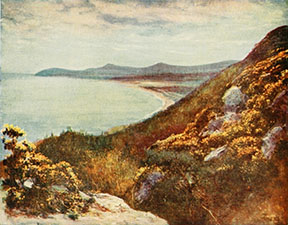 A traveler through a dusty road strewed acorns on the lea;
And one took root and sprouted up, and grew into a tree.
Love sought its shade, at evening time, to breath its early vows;
And age was pleased, in heats of noon, to bask beneath its boughs;
The dormouse loved its dangling twigs, the birds sweet music bore;
It stood a glory in its place, a blessing evermore.

A little spring had lost its way amid the grass and fern,
A passing stranger scooped a well, where weary men might turn;
He walled it in, and hung with care a ladle at the brink;
He thought not of the deed he did, but judged that toil might drink.
He passed again, and lo! the well, by summers never dried,
Had cooled ten thousand parching tongues, and saved a life besides.

A dreamer dropped a random thought; ‘t was old, and yet ‘t was new;
A simple fancy of the brain, but strong in being true.
It shone upon a genial mind, and lo! its light became
A lamp of life, a beacon ray, a monitory flame.
The thought was small; its issue great; a watch-fire on the hill,
It shed its radiance far adown, and cheers the valley still!

A nameless man, amid the crowd that thronged the daily mart,
Let fall a word of Hope and Love, unstudied, from the heart;
A whisper on the tumult thrown,–a transitory breath,–
It raised a brother from the dust; it saved a soul from death.
O germ! O fount! O word of love! O thought at random cast!
Ye were but little at the first, but mighty at the last.