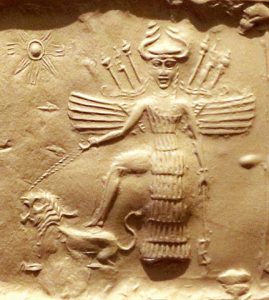 The Devils and Evil Spirits of Babylonia
London 1903

Raging storms, evil gods are they
Ruthless demons, who in heaven’s vault were created, are they,
Workers of evil are they,
They lift up the head to evil, every day to evil
Destruction to work.
Of these seven the first is the South wind…
The second is a dragon, whose mouth is opened…
That none can measure.
The third is a grim leopard, which carries off the young …
The fourth is a terrible Shibbu …
The fifth is a furious Wolf, who knoweth not to flee,
The sixth is a rampant … which marches against god and king.
The seventh is a storm, an evil wind, which takes vengeance,
Seven are they, messengers to King Anu are they,
From city to city darkness work they,
A hurricane, which mightily hunts in the heavens, are they
Thick clouds, that bring darkness in heaven, are they,
Gusts of wind rising, which cast gloom over the bright day, are they,
With the Imkhullu [2] the evil wind, forcing their way, are they,
The overflowing of Adad [3] mighty destroyers, are they,
At the right of Adad stalking, are they,
In the height of heaven, like lightning flashing, are they,
To wreak destruction forward go they ,
In the broad heaven, the home of Anu, the King, evilly do they arise, and none to oppose.
When Enlil heard these tidings, a plan in his heart he pondered,
With Ea, exalted Massu of the gods, be took counsel. Sin, Shamash, and Ishtar, whom he had set to order the vault of heaven,
With Anu he divided the lordship of the whole heaven,
To these three gods, his offspring
Day and night, without ceasing, he ordained to stand,
When the seven evil gods stormed the vault of heaven,
Before the gleaming Sin, they set themselves angrily, [4]
The mighty Shamash, Adad the warrior, they brought on their side,
Ishtar, with Anu the King, moved into a shining dwelling, exercising dominion over the heavens,

Day and night he was dark (i.e., Sin), in the dwelling of his dominion he sat not down,
The evil gods, the messengers of Anu, the King, are they,
Raising their evil heads, in the night shaking themselves, are they,
Evil searching out, are they,
From the heaven, like a wind, over the land rush they.
Enlil saw the darkening of the hero Sin in heaven,
The lord spoke to his minister Nusku,
O My minister Nusku, my message unto the ocean bring,
The tidings of my son Sin, who in heaven has been sadly darkened,
Unto Ea, in the ocean, announce it.”
Nusku exalted the word of his lord,
To Ea, in the ocean, he went quickly,
To the prince, the exalted Massu the lord Nudimmud.[5]
Nusku, the word of his lord there announced Ea in the ocean heard that word,
He bit his lip and filled his mouth with wailing;
Ea called his son Marduk, and gave him the message:
“Go, my son Marduk,
Son of a prince, the gleaming Sin has been sadly darkened in heaven,
His darkening is seen in the heavens,
The seven evil gods, death-dealing, fearless are they,
The seven evil gods, like a flood, rush on, the land they fall upon, do they,
Against the land, like a storm, they rise, do they,
Before the gleaming Sin, they set themselves angrily;
The mighty Shamash, Adad the warrior, they brought on their side.”

NOTES:
[1] This story is the sixteenth tablet of a series called the “Evil Demon Series,” of which we have an Assyrian with a parallel Sumerian text. Presumably, therefore, it was a very ancient legend.
[2] The Imkhullu appears also in the Creation Epic.
[3] Adad is god of storm, Anu of heaven, Enlil of storm, Sin of the Moon, Shamash of the Sun, and Ishtar of love and fruitfulness. The meaning of Massu is unknown; but Ea was long the chief ruler.
[4] The evil gods darken the moon by an eclipse, Shamash helping them by withdrawing his light from the moon, and Adad by sending cloudy weather.
[5] A name for Ea.

DESCRIPTIONS OF “THE SEVEN”

III
The high enclosures, the broad enclosures like a flood they pass through.
From house to house they dash along.
No door can shut them out,
No bolt can turn them back.
Through the door, like a snake, they glide,
Through the hinge, like the wind, they storm.
Tearing the wife from the embrace of the man,
Snatching the child from the knees of a man,
Driving the freedman from his family home.

[1 ]The mistress of the netherworld, while Namtar is the god of pestilence.

CHARM AGAINST THE SEVEN EVIL SPIRITS