Some Thoughts on the Immorality of Gambling 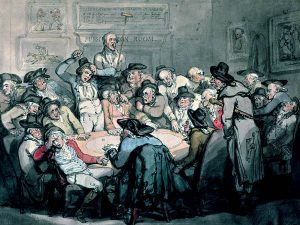 For a number of years, for reasons both personal and philosophical in nature, I have pondered the question of whether or not gambling is a generally harmless or generally harmful activity.

The use of the term, “generally” is dictated by a recognition that virtually all activities, taken to an extreme, may be unhealthy.  The fact that some individual may become an alcoholic by overindulging in drink should not, in my personal opinion, constitute proof that the occasional and reasonable enjoyment of a glass of wine or beer is a bad thing; we might as well condemn food because its consumption leads, in extreme cases, to obesity.

Thus, while it is right and necessary to acknowledge that the phenomenon of gambling addiction exists, and that it is a real and serious problem for those who suffer from such an addiction (as well as their families), we must focus our attention elsewhere if we are to arrive at a conclusion that will have general applicability.

Arguments for gambling usually fall into two broad categories, the first being that gambling for many is a harmless pastime that can fill otherwise empty hours in an entertaining manner, and the second being that gambling, even if it were a crime, is a victimless one, and thus should not be regulated, condemned, or censured.

Arguments against gambling are also fairly straightforward.  A good overview of them can be found in Thomas Clarkson’s A Portraiture of Quakerism, which includes a chapter concerning the Quaker view of gambling.  Clarkson’s book was published in 1806, and the language is a bit archaic, but the arguments really have not changed dramatically from then until our present day.  These arguments may also be lumped into two broad categories, the first being that gambling corrupts one’s mental and moral judgment, and the second being that there are far better things to do with one’s time.

My own view – and this is only my own personal view, not to be regarded as any official or unofficial position of any organization – is that the Quaker view, as I understand it, is the correct one.  Reasons for this assertion are based upon study and personal experience.

Let us, as an example, look at poker, a game with which I have a passing familiarity.  Poker is a game that, in essence, rewards those who excel at being devious and misleading, and punishes those who do not.  This basic fact underlies a number of treatises on poker, including David Sklansky’s popular Theory of Poker.

Obviously, then, the more one plays the game, and the better one gets, the more one becomes skilled in the art of deception.  Is this a good thing?  Machiavelli (and some of his modern-day devotees) might argue that it is.  Quakerism, Buddhism, and many other belief systems, would argue that it is not, that dishonesty is never a good thing, and that the development of skill in misleading others is a worse-than-neutral exercise.

There is more to consider.  Read any current book on playing poker – many exist, and are quite popular – and one will quickly come across a discussion of, “table selection.”  It is a simple concept.  When one visits a casino to play poker, one seeks a table with the highest likelihood of having unskilled players, thus increasing one’s chances of taking another’s money.  Thus, there is no nobility of sport involved, and certainly no sportsmanlike conduct, for one is not seeking a challenge, but rather an “easy mark.”  Assuming one is playing in a licensed casino, such action is not illegal; but is it moral?  I’ve yet to hear any convincing justification in that regard.

Poker is, of course, only one of many gambling activities taking place in the average casino.  The real income-producers (for the casinos, not the players) are the slot machines.  Here we witness lines of people, oftentimes retirees, knowing that the odds are terribly stacked against them, pumping quarters or dollars into machines in desperate search of a bit of excitement.  A small portion of the money finds its way back to a few lucky players, while all the rest of it boosts casino profits.

What is the harm?  If that is a question that comes to mind, then I invite the questioner to witness the spectacle in person.  Can there be any activity to compare with this in terms of depressiveness?  It is as if the slot machine’s true purpose is to deaden the souls of all who interact with it, and the money aspect only an afterthought.

Put aside the corruption of morals, and the waste of money, and one still is confronted with the inescapable fact that the best, the absolute best, that can be said of gambling, is that it is a terrible waste of time.  Time that could be spent improving oneself, or the lives of others, is thrown away, hour after hour, day after day, in every casino in America.  It is there in those casinos that we witness time, that most precious of gifts bestowed upon us by a higher power, continually flushed away with every pull of the slot machine handle.

A harmless pastime?  A victimless crime?  There is nothing harmless about a pastime that robs a person of time (and money) that could be put to good use, and such a robbery is hardly victimless. The individual, as well as his or her society, is robbed of the potential of good and worthwhile deeds every time a casino door opens.