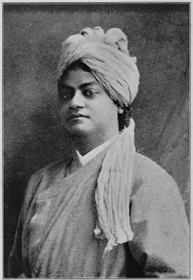 Revealed Religion – religion that is made known and developed by divine intervention and communication with God and/or angels – has this danger, that a man or woman can claim to have had a revelation without there being any way in which this claim can be verified. In the United States, one immediately calls to mind Joseph Smith and his communication with the Angel Moroni, but there are a great many examples from history. Swami Vivekananda, writing in 1896 in his book Raja Yoga, had this to say on the subject:

We find, in studying history, one fact held in common by all the great teachers of religion the world ever had. They all claim to have got their truths from beyond, only many of them did not know where they got them from. For instance, one would say that an angel came down in the form of a human being, with wings, and said to him, “Hear, O man, this is the message.” Another says that a Deva, a bright being, appeared to him. A third says he dreamed that his ancestor came and told him certain things. He did not know anything beyond that. But this is common that all claim that this knowledge has come to them from beyond, not through their reasoning power. What does the science of Yoga teach? It teaches that they were right in claiming that all this knowledge came to them from beyond reasoning, but that it came from within themselves.

The Yogi teaches that the mind itself has a higher state of existence, beyond reason, a superconscious state, and when the mind gets to that higher state, then this knowledge, beyond reasoning, comes to man. Metaphysical and transcendental knowledge comes to that man. This state of going beyond reason, transcending ordinary human nature, may sometimes come by chance to a man who does not understand its science; he, as it were, stumbles upon it. When he stumbles upon it, he generally interprets it as coming from outside. So this explains why an inspiration, or transcendental knowledge, may be the same in different countries, but in one country it will seem to come through an angel, and in another through a Deva, and in a third through God. What does it mean? It means that the mind brought the knowledge by its own nature, and that the finding of the knowledge was interpreted according to the belief and education of the person through whom it came. The real fact is that these various men, as it were, stumbled upon this superconscious state.

The Yogi says there is a great danger in stumbling upon this state. In a good many cases there is the danger of the brain being deranged, and, as a rule, you will find that all those men, however great they were, who had stumbled upon this superconscious state without understanding it, groped in the dark, and generally had, along with their knowledge, some quaint superstition. They opened themselves to hallucinations. Mohammed claimed that the Angel Gabriel came to him in a cave one day and took him on the heavenly horse, Harak, and he visited the heavens. But with all that, Mohammed spoke some wonderful truths. If you read the Koran, you find the most wonderful truths mixed with superstitions. How will you explain it? That man was inspired, no doubt, but that inspiration was, as it were, stumbled upon. He was not a trained Yogi, and did not know the reason of what he was doing. Think of the good Mohammed did to the world, and think of the great evil that has been done through his fanaticism! Think of the millions massacred through his teachings, mothers bereft of their children, children made orphans, whole countries destroyed, millions upon millions of people killed!

So we see this danger by studying the lives of great teachers like Mohammed and others. Yet we find, at the same time, that they were all inspired. Whenever a prophet got into the superconscious state by heightening his emotional nature, he brought away from it not only some truths, but some fanaticism also, some superstition which injured the world as much as the greatness of the teaching helped. To get any reason out of the mass of incongruity we call human life, we have to transcend our reason, but we must do it scientifically, slowly, by regular practice, and we must cast off all superstition. We must take up the study of the superconscious state just as any other science. On reason we must have to lay our foundation, we must follow reason as far as it leads, and when reason fails, reason itself will show us the way to the highest plane. When you hear a man say, “I am inspired,” and then talk irrationally, reject it. Why? Because these three states — instinct, reason, and superconsciousness, or the unconscious, conscious, and superconscious states — belong to one and the same mind. There are not three minds in one man, but one state of it develops into the others. Instinct develops into reason, and reason into the transcendental consciousness; therefore, not one of the states contradicts the others. Real inspiration never contradicts reason, but fulfils it. Just as you find the great prophets saying, “I come not to destroy but to fulfil,” so inspiration always comes to fulfil reason, and is in harmony with it.